You will find this Bremer French Onion Soup in the Aldi freezer section!

French onion soup is a classic, and it’s the favorite soup of many people. The concoction usually includes beef broth, caramelized onions, and wine. It’s usually served with a layer of melted cheese and croutons or crusty bread on top. 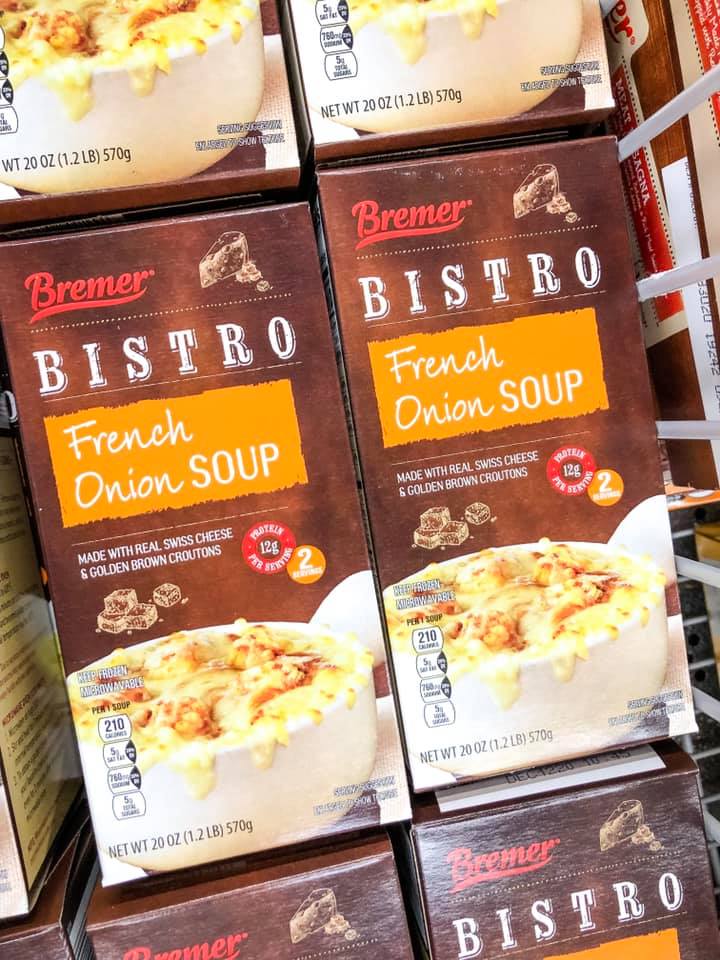 Aldi’s version of French Onion Soup is available on a seasonable basis. It usually comes out as an Aldi Find a few times a year. It is priced at $3.99 for two 10-ounce servings (prices may vary by store).

You won’t find this soup in the canned soup aisle. Bremer French Onion Soup is available in the freezer section.

How to make French Onion Soup

I have never seen a frozen soup packaged like this one. The two servings of soup are frozen in cylinders and vacuum-sealed in plastic. The soup is not in any bowl or container — just frozen in the cylinder shape wrapped in the plastic.

So obviously, the first part of the directions for this french onion soup involve cutting it out of the plastic wrapping and placing it in a microwave- or oven-safe bowl.

To heat this soup, you are given two choices in directions — oven or microwave. Oven is listed as the preferred method, but be aware that even though this is a frozen convenience item, there’s not going to be anything quick about oven preparation. You will need to bake the soup at 400 degrees for 40 minutes. The good thing about the oven preparation is that it does result in a layer of swiss cheese and bread browned on top of your soup.

The microwave preparation method will give you hot soup in just five minutes. But be aware that the cheese will be stirred into the soup if you heat in the microwave. If you still want that layer of cheese on the top, the box suggests topping the heated soup with cheese and putting under your broiler to melt it.

Is this soup good?

We enjoyed this Bremer French Onion Soup even more than we expected to. It has great flavor, and baking it did result in hot soup with a cheesy topping. I bought and prepared this on a cold day when I was feeling under the weather, and it filled the bill for something that felt comforting and warm for supper, without needing a lot of preparation.

If you love French onion soup, and it’s not something you’re going to make on your own, this would definitely satisfy your craving. It would also be an easy first course to serve if you are making a more involved dinner.

Have you tried this Aldi French Onion Soup? What did you think?