Dieters, piscatarians, low carbers, and fish lovers should head straight to Aldi for their high quality tuna. Tuna makes for a healthy plate, as it is recommended by nutritionists for its high levels of omega-3 fatty acids, which may help to reduce omega-6 fatty acids and LDL cholesterol. And, of course it is delicious. 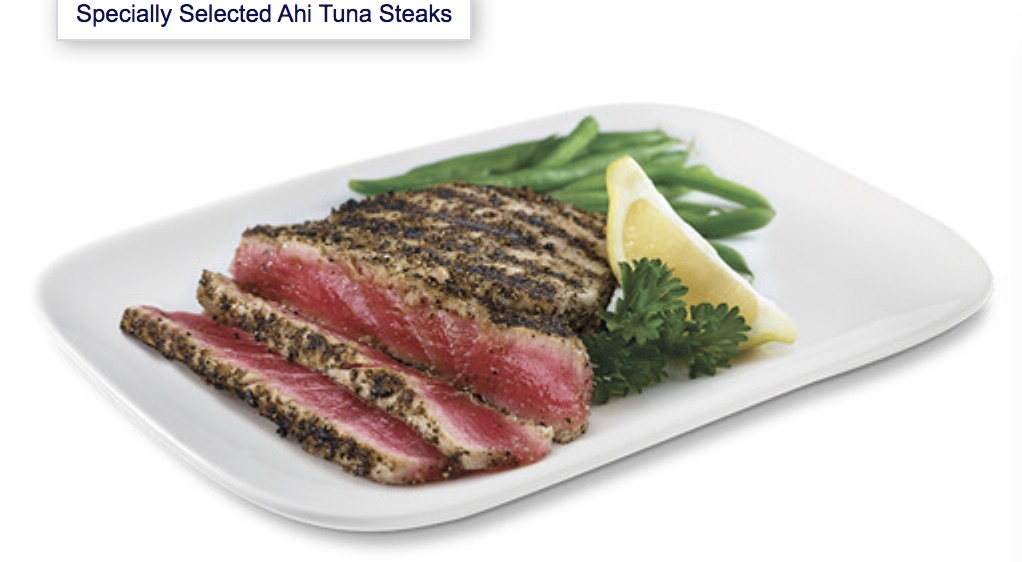 Aldi sells tuna steak, which you can easily find on the frozen foods aisle. While at Aldi, be sure to sample the different types of tuna that the supermarket chains offer.

The cost of Aldi’s twelve ounce packages of frozen Ahi may vary according to location and availability. But here is a price for a reference:

Tuna is a highly nutritious saltwater fish popular among cuisine lovers in restaurants. As one of the most eaten fish globally, different tuna types have graced supermarket shelves for a long time.

Speaking of types, tuna comes in different kinds, such as yellowfin, bigeye, bluefin, and  Albacore.

Ahi tuna refers to both yellowfin and bigeye tuna. At Aldi, you will find ahi tuna in the section on frozen seafood.

As a packed product, Aldi Tuna is manufactured by Aldi stores themselves, but the tuna comes from Vietnam.

So, are tuna steaks good for you? Being low on calories yet full of nutrients and minerals, tuna steak is considered a must-eat for you.

Tuna also has vital vitamins such as niacin, which helps in blood circulation, nerve functioning, and the generation of body energy. There’s also potassium that helps lower blood pressure, while the other minerals simply improve body immunity.

The flavor and texture of frozen fresh tuna steak don’t differ from the off-the-boat tuna. You can, therefore, confidently buy from a reputable market such as the Aldi supermarket chains.

Aldi customers on Reddit have rated Aldi tuna steak favorably. Some of them had this to say. 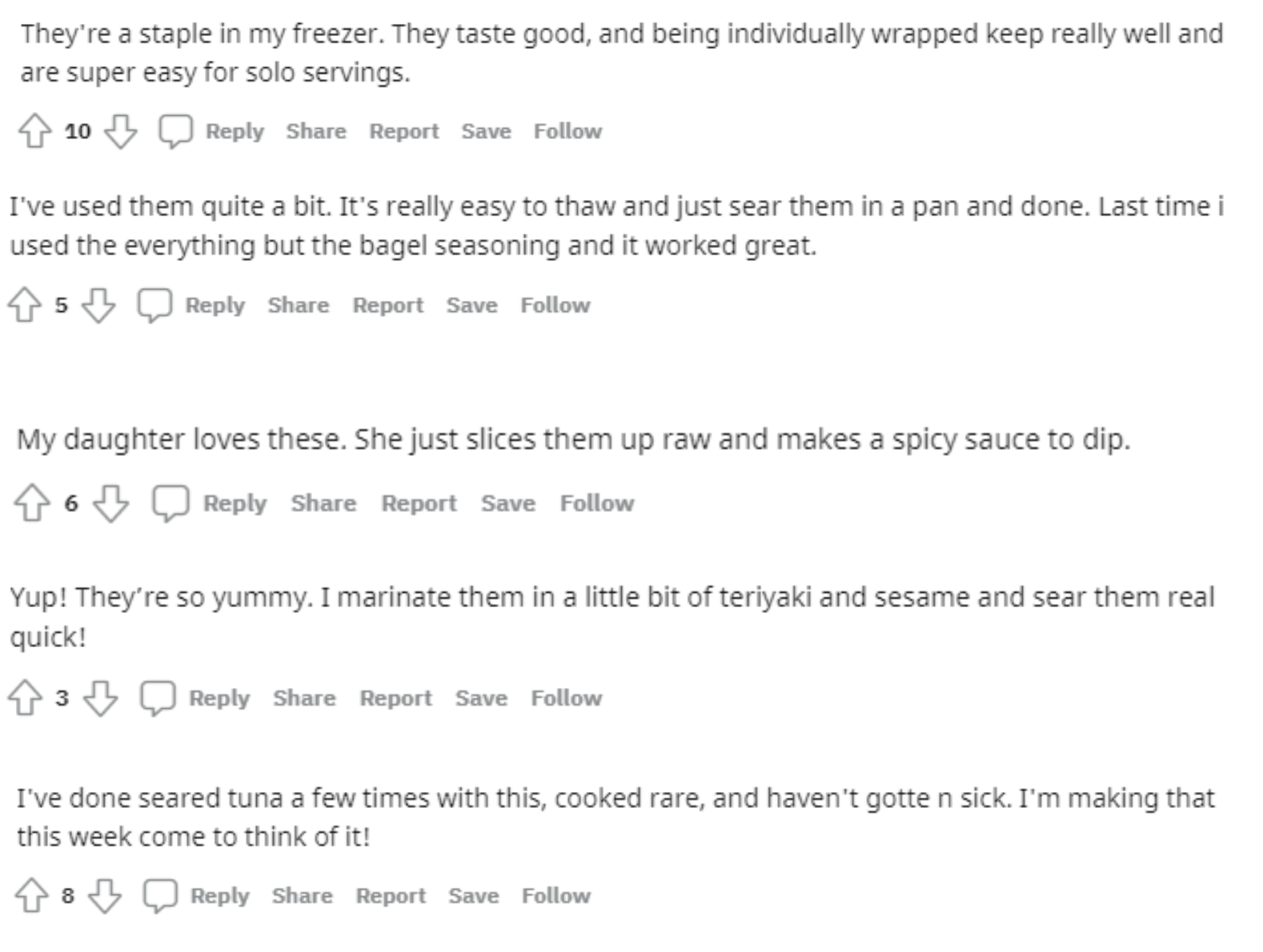 You can follow these simple steps to make grilled tuna to satisfy your craving.

2. Cooking in a Skillet

How Do You Know If Tuna Steak Is Bad?

After cooking, tuna steak can stay for 3-4 days in the fridge and up to four months in the freezer. However, cooked tuna can still go bad, and therefore, you should pay attention to the telltale signs to avoid consuming it.

A sour smell is an obvious sign that your tuna steak is no longer good for consumption. Also, if it has a slimy texture or dull color, please discard it since consuming it can lead to illness. Generally, discard tuna with a funny appearance and an off smell.

How Do You Thaw Frozen Tuna Steaks?

You can defrost tuna using a refrigerator, microwave, or cold water. Let’s examine each of these ways in detail.

Thawing in a refrigerator is the safest method because it prevents the growth of bacteria on the food surface which, in turn, prevents contracting food-borne diseases after consumption. Besides, tuna thawed in the refrigerator can stay for two days or more after thawing before cooking or be frozen again.

Thawing tuna in cold water is also a convenient method if access to a refrigerator is restricted. However, tuna defrosted this way must be cooked immediately.

Tuna defrosted in a microwave should also be cooked immediately after thawing.

Yes, you can eat raw Aldi tuna and reap its abundant health benefits. For the record, raw tuna has plenty of healthy fats and proteins and is low on carbs. Besides, raw tuna brings Omega-3 fatty acids, which help improve your heart health. You also stand a higher chance of boosting your immune system because of the fish’s minerals, such as zinc, manganese, and vitamin C.

While eating raw tuna is a common thing and is allowed, you must handle any raw fish with care avoid ingesting harmful parasites. Also, note that tuna, an aquatic animal, has high levels of mercury, which can affect your health too! Specifically, eating raw tuna is not recommended for pregnant women and people with compromised immunity.

Should Tuna Steak Be Raw in the Middle?

Yes, a well-cooked tuna steak should be raw in the middle to ensure the steak remains succulent and tender. Cooking beyond this level will make it dry because it’s severed from the fish’s login area, which is delicate and lean.

What Is the Difference Between Ahi Tuna and Yellowfin Tuna?

Does Aldi Have Ahi Tuna?

Yes, you can buy ahi tuna at Aldi. These specially selected tuna steaks offer a delicious taste to satisfy your craving, whether grilled, panned, or baked.

Aldi Champagne Sequin Joggers AKA Sparkle Pants are Taking Over the Aisle of Shame Community!