In 2021, rumors began circulating on Twitter that Walmart owns Wayfair. Here, I’ll dive into how those rumors emerged and whether they hold any truth.

How Are Wayfair and Walmart Related?

The Tweet that led consumers to believe Walmart owned Wayfair was originally posted in October 2021 and references another Tweet from an account that has since been suspended.

As it turns out, the Twitter user’s assumption was incorrect.

Wayfair and Walmart are only related as retail competitors. They do not share any major investors, and Walmart does not own Wayfair.

In the past, Wayfair and Walmart held a temporary partnership through which Wayfair sold select goods through Walmart’s e-commerce service, Walmart Marketplace. Wayfair was a third-party Marketplace seller similar to many other online retailers. However, this partnership has seemingly come to a close as there are currently no Wayfair items listed for sale on Walmart.com.

If you previously purchased an item through Walmart Marketplace that was being sold by Wayfair, you should direct any questions and concerns you may have about your item directly to Wayfair’s customer service department.

Wayfair is an independent corporation functioning as its own parent company. The company is publicly traded on the New York Stock Exchange and is based in Boston, Massachusetts. Wayfair’s key stockholder is Prescott Investors, Inc., a financial services company based in Connecticut that owns just over 5% of Wayfair Inc.

What Do They Sell?

Founded in 2002, Wayfair specializes in selling furniture and homegoods and competitive prices. They have warehouses throughout the US and Europe, supplying over 14 million products from 11,000 global suppliers.

Popular item categories on Wayfair.com include:

When it comes to quality, it’s important to know that Wayfair is not a manufacturer. This means that the quality of products sold on Wayfair.com varies widely based on supplier. With over 11,000 global suppliers, Wayfair is a source for everything from cheap staging furniture to high-quality pieces that will last a lifetime.

Here is a helpful discussion of product quality at Wayfair from a Quora user: 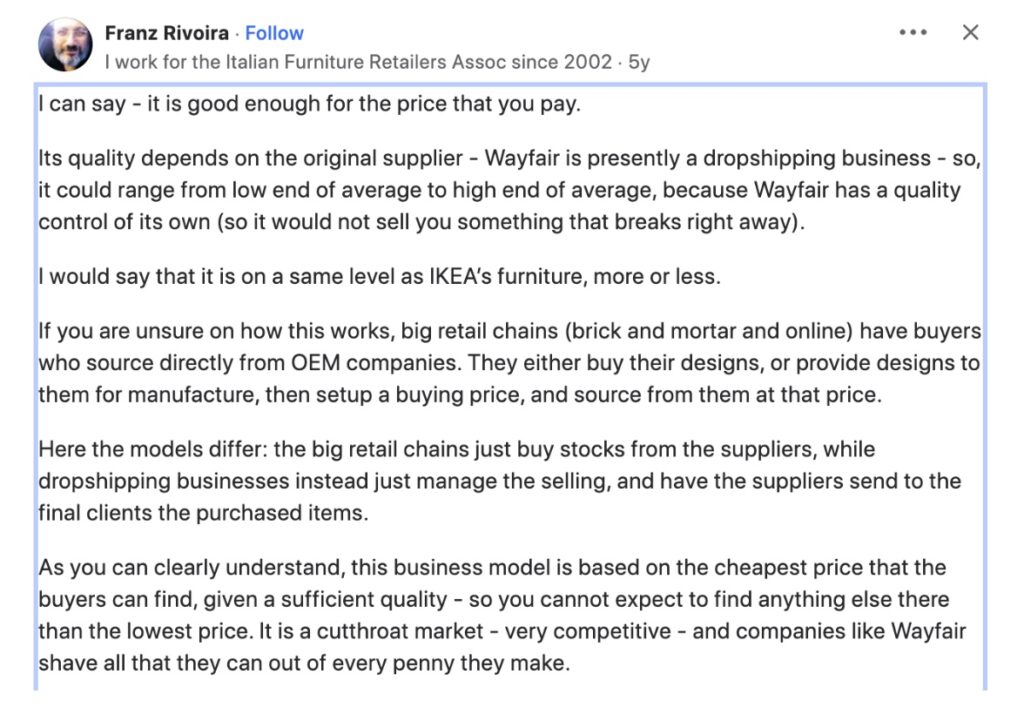 Despite opening several physical stores just prior to the Covid-19 pandemic, Wayfair does not currently have any brick-and-mortar locations. Their flagship store, which opened in Natick, Massachusetts, in 2019, lasted just over a year and was officially closed in December 2020.

In December 2021, Wayfair announced plans to open three new brick-and-mortar stores in Massachusetts throughout 2022. However, these stores do not bear the Wayfair name. Instead, they operate under two of Wayfair’s auxiliary brands–All Modern and Joss & Main.

When Wayfair announced the opening of these three stores, they also publicized plans to open several more stores representing all five of their brands by the end of 2023. Wayfair’s brands include Wayfair, AllModern, Joss & Main, Birch Lane, and Perigold.

Who Are Wayfair’s Competitors?

Because Wayfair specializes in selling furniture and homegoods, their main competitors are large retailers with a similar business model.

The company on this list with the closest business model to Wayfair is IKEA, which pulls in over twice as much revenue every year than the online-only brand.

Does Wayfair have a warehouse?

Yes. Wayfair has warehouse locations all over the US and Europe.

Are Wayfair products made in China?

Do you have to pay for the Wayfair app?

No. The Wayfair app is free to use.

Do Wayfair and Overstock have the same items?

No. Wayfair and Overstock do not typically carry the same items, although they do sell items in many of the same categories.

Is it safe to use Wayfair?

Do All Walmart Stores Sell Cigarettes?

How Does A Tune-Up Work At Walmart? (+Cost)

Can You Return Items To Walmart Without The Box?

Where Can You Buy & Use Walmart Gift Cards?