Have you ever had a slice of pizza from the Costco food court? If not, you’re definitely missing out. Costco pizza has earned itself a notorious reputation over the years as being some of the best, biggest, and most affordable pizza-by-the-slice available. But did you know that you can also order full pizzas from the Costco food court and even have them delivered right to your door? Keep reading to find out how! 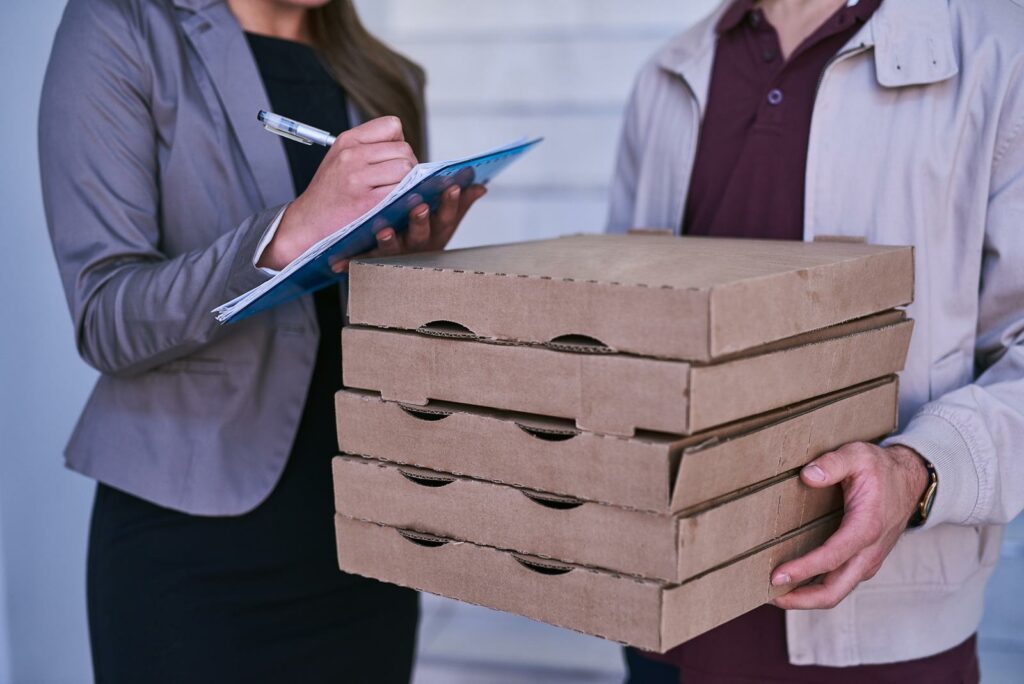 How Much Does Pizza Cost at Costco?

First, let’s go over the basics…

One slice of pizza from Costco’s food court costs $1.99, while a full 18” pizza costs $9.95. These prices are the same regardless of which type of pizza you order.

These prices are truly unbeatable. We dare you to name another place that sells made-to-order pizzas for less than ten bucks.

One of the reasons why Costco has been able to maintain such low pizza prices is because they keep their options simple. Unlike other pizza places that offer a wide range of topping varieties and customization options, Costco has stuck to the tried and true approach.

The following types of pizza are currently available at the Costco food court:

Unfortunately, while Costco used to offer a combo pizza that contained a mix of meat and veggies, they officially discontinued this menu item in June 2022.

The one big downside of ordering pizza from the Costco food court is that Costco does not offer delivery or online ordering. If you want to order a pizza from Costco, you have to visit in person or call your order in for pickup.

But surely there must be a way to have a Costco pizza delivered… right?

And you’re right! There are a few hacks for getting a Costco pizza delivered right to your door, but they take a bit of work and/or extra cash. Keep reading to find out how to do it.

If you’ve never heard of TaskRabbit, it’s a convenient service connecting users with freelancers who perform a wide range of tasks from gift wrapping to running errands. Whatever your need is, you’ll probably be able to find someone to accomplish it for you on TaskRabbit.

And delivering a Costco food court pizza definitely qualifies! Simply create an account with TaskRabbit, find someone who hires themselves out for “shopping” or “delivery,” then let them know what you want.

TaskRabbit freelancers are paid per hour, and many of the most reliable workers on the platform charge between $30 and $40 per hour. So keep this in mind before deciding whether you really want your pizza delivered or if you’d rather just go get it yourself.

Getting a Costco pizza delivered through Instacart is a bit complicated, but it’s definitely possible.

To try out the Instacart pizza-delivery hack, follow these steps:

Some Instacart shoppers are also willing to front the money for a pizza if they trust the customer will reimburse them upon delivery. This means that you could simply ask your IC shopper to buy you a pizza and then pay them back when they arrive at your house.

But as you can see from the rest of this Reddit thread, most IC shoppers are understandably unwilling to front their own money for a customer’s special request for pizza.

Keep in mind that this hack is not aligned with Instacart’s standard mode of operations, so there’s a chance that your Instacart shopper won’t be willing to help you out. If they do, make sure to offer them a generous tip since they have gone out of their way to do you a favor.

A few sources online have claimed that Costco pizzas can be ordered for delivery through Postmates, but we haven’t been able to confirm that this is possible. If Postmates and Costco both operate in your area, it’s worth a try. But don’t be surprised if it doesn’t work.

Once upon a time, Costco sold a take-and-bake version of their famous food court pizza. But unfortunately, that time is no longer.

It’s unclear why Costco discontinued their take-and-bake pizzas, but it’s likely that they weren’t making enough money off of them to justify continued production.

Costco still sells a wide range of take-and-bake pizzas in their frozen section:

To browse all of the take-and-bake pizzas available on Costco.com, click here.

Does Costco Have Good Quality Pizza?

The reputation of Costco pizza is that it is extremely tasty and high quality with great value for the price. Especially considering how large each slice is, it’s almost unbelievable that you can still get a full pizza for under $10 at Costco.

Here’s a review from a satisfied customer on TripAdvisor.com:

A user on OneBite.app admits that Costco pizza is good, but doesn’t think it’s necessarily as amazing as others make it out to be:

Can you eat at Costco Food court without a membership?

Can you order a custom pizza at Costco?

Yes. There aren’t very many options since Costco no longer makes pizzas with veggie toppings, but you can still request a “half cheese, half pepperoni” pizza when you order.

How many Costco pizzas do you need for 20 adults?

Two. Each Costco pizza comes with twelve slices, so two pizzas can theoretically feed 24 people if everyone only eats one piece. If you want everyone to get two pieces, then you would need to buy four pizzas.

How Much Is Plan B at Costco?

What Employee Benefits Does Costco Offer?

Does Costco Have Membership Fees For Seniors?