It’s probably no surprise that Costco sells crab legs (and in large quantities, too!). But Costco actually has a wider selection of crab legs than you might think. Keep reading! 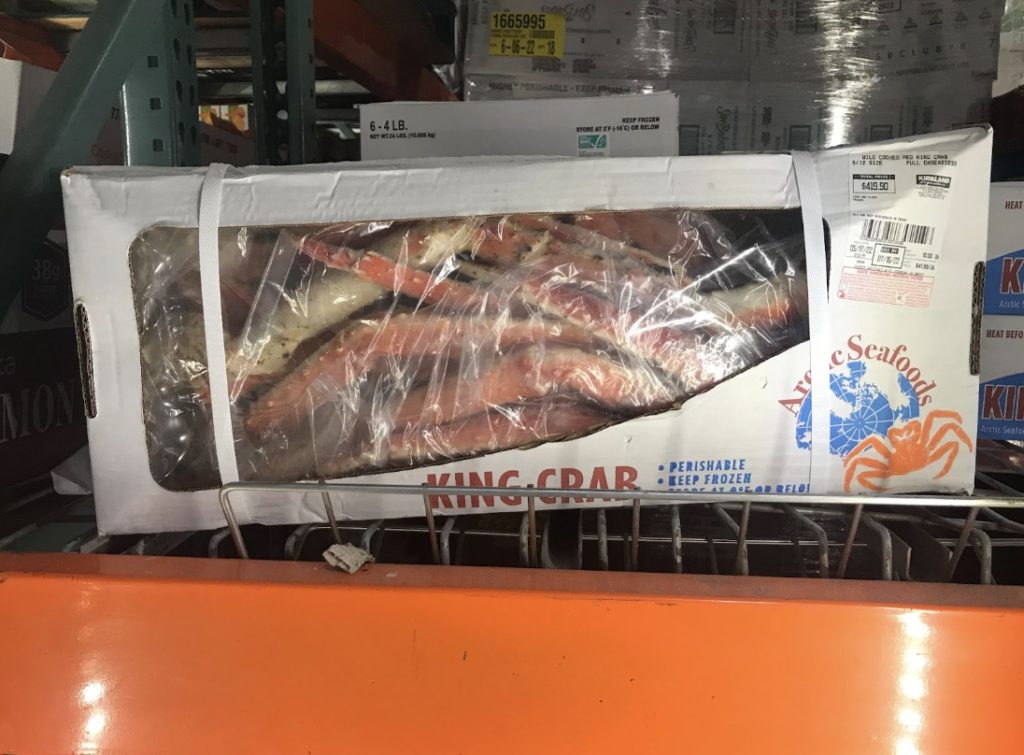 The two main types of crab legs sold on the market are king crab legs and snow crab legs. In their warehouses, Costco exclusively sells king crab legs, which are known as being the tastier (and the more expensive) variety.

Whereas snow crabs have a long harvesting season and are easy to find, king crabs are a bit more difficult to harvest in large quantities. They also boast a rich and notoriously lobster-like flavor that makes them a favorite of crab lovers.

If you’re a fan of snow crab or are looking for something more affordable than king crab, you can buy an 8 lb. box of Bairdi Snow Crab sections for $299.99 on Costco.com.

What Type Of King Crab Legs Does Costco Sell?

Around Christmas and other major holidays, Costco often sells smaller packages of crab legs, coming in at about 3 lbs. So, keep an eye out for those if you’d like to try these out without having to fork out a ton of money.

How Much Are King Crab Legs At Costco?

There is a lot of mixed information available online right now regarding the price of crab legs at Costco. And it’s understandable, because the prices have increased multiple times over the past few months.

But we went straight to the source and found out exactly what the latest per pound price is for crab legs at Costco. So, you can be sure this info is accurate and up to date.

Interestingly, we were able to find a box that was still priced at the last per pound price, which was $36.99. But we were advised by a Costco employee that once those boxes are sold, we won’t be seeing crab legs at that price again.

The value of crab has skyrocketed in recent years, with the per pound price of crab legs at Costco increasing by almost double in the past six months.

Now, if you’re looking into buying crab legs from Costco.com, the prices are a little different.

Plus, we have reason to believe that the variety sold in stores is not only cheaper, but also tastes better. Keep reading!

One really nice thing about Costco’s crab legs is that they come fully cooked. These crab legs can even be eaten cold simply by thawing them overnight in the refrigerator.

But if you’ve had crab legs before, then you probably know that to enjoy them properly, you’ve got to eat them warm!

Here are some ideas for how you can prepare your Costco Crab Legs.

Use boiling water to prepare your pre-cooked crab legs by following these steps:

If you’d like to heat your crab legs in the oven, you can do this by following these steps:

If you want to get extra adventurous, try this recipe for Grilled Crab Legs with Garlic Butter Sauce from the Sunday Supper Movement. Yum!

And if you’re a fan of steaming food, try this recipe for Steamed King Crab Legs with Garlic Butter and Lemon from For the Love of Cooking.

Are Costco King Crab Legs Worth It?

To answer this question, we checked in on real customer reviews via Costco.com. Here’s what people had to say.

First off, we’ll look at Costco’s Golden King Crab legs (sold online only). These have honestly gotten pretty mixed reviews over the years. Of just over 100 reviews, almost 30% of customers gave these crab legs 3 stars or less.

Here’s one from a satisfied customer:

And a couple from some not-so-satisfied customers:

Now, let’s see if the Red King Crab Legs fare any better in the eyes of the customers.

It’s important to note that the brand of crab legs sold on Costco’s website (Northwest Fish) differs from the brand sold in stores (Arctic Seafoods).

Here are some reviews for the Northwest Fish Red King Crab Legs, sold online only:

Overall, it seems like customers really aren’t satisfied with the Northwest Fish crab legs. This is especially disappointing since this brand costs more than the brand sold in stores.

Let’s hope the in-store offering is getting better reviews!

According to quite a few users on Reddit, Costco’s Arctic Seafoods Red King Crab Legs are way more satisfying and delicious! 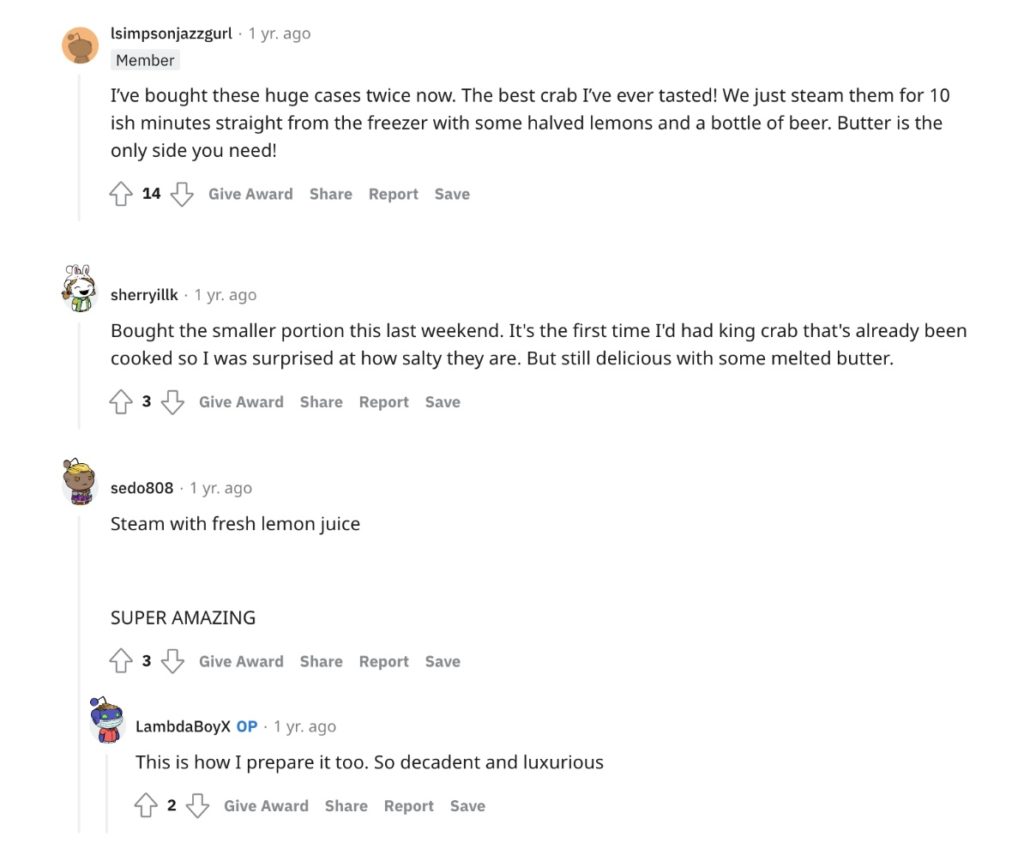 There you have it! If you’re going to buy crab legs from Costco, buy them in person to make sure you’re getting the store’s best offering at the lowest possible price.

How much is a 10 lb box of King crab legs at Costco?

Yes. While they do not sell them separately, you can buy Bairdi Snow Crab legs from Costco by buying an 8 lb. box of snow crab sections. This includes legs. These can only be ordered online through Costco.com.

No. Costco’s King Crab Legs are sold frozen, so they need to at least be thawed before eating. However, they do come pre-cooked.

Yes. Costco sells a variety of crab legs on their website, which can be ordered online, packed frozen, and delivered within 2 days.

Does Costco have fresh crab legs?

No. All of the crab legs sold at Costco are frozen.

How long are Costco crab legs good for?

According to freshseafood.com, king crab legs should not be frozen for longer than 6 months. Once your crab legs have been thawed, they should be consumed within 3-5 days and stored in the refrigerator.

While it took quite a bit of hunting, we managed to track down the latest and greatest Costco crab leg info for you. At $41.99 per pound, king crab legs are definitely something to plan ahead before buying. The 10 lb. boxes are pretty large, so make sure you have room in your freezer and make a plan to eat them within 6 months.

These boxes are great for parties and holidays, especially if you can go in on the cost with a group of friends or family.

Overall, the crab legs sold in Costco Warehouses beat out the brand sold online at Costco.com in terms of flavor, customer satisfaction, and price. There’s no arguing with that!

Is Renting A Car From Costco Cheaper?

Does Costco Still Have Dental Insurance?