Costco is a retail giant, with more than 572 locations in the US and over $141 billion in revenue in 2021. As one of the biggest employers in the United States, Costco offers many different job types.

But what positions at Costco pay the best? This article will shed light on how much Costco employees make in different positions. 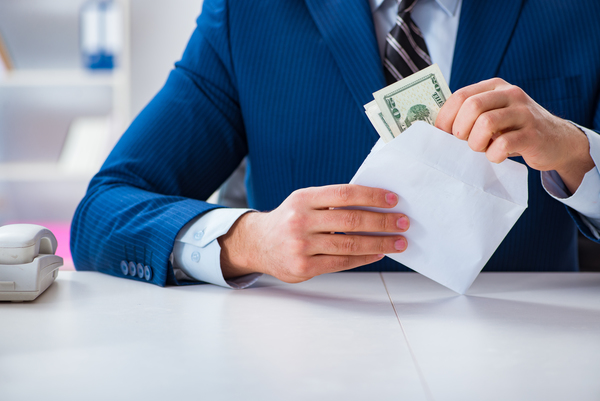 According to Careerbliss, the vice president of retail sales is the highest-earning employee at Costco, with an average annual salary of $201,000. On average, the lowest-earning Costco employee makes about $18.05 per hour or $34,000 annually.

However, the actual pay depends on several factors, including experience and location. Below is a list of some of the most common positions at Costco and their average salaries per hour.

How Often Do Costco Employees Get a Raise?

The company gives full-time workers two raises per year and one raise per year to part-time workers. Employees are also eligible for bonuses based on their performance and individual contributions to the company.

10 Best and Worst Jobs at Costco

Jobs at Costco vary greatly, but some stand out as being especially desirable. Here are the five best jobs at Costco:

Pharmacists are the most common medical professionals at Costco stores. They counsel customers on medications and offer advice on supplements, vitamins, and other health products.

As a Pharmacist, you’ll also fill prescriptions and manage the pharmacy’s inventory of prescription drugs. The average hourly wage for a Costco pharmacy technician is $19.15

A Costco warehouse supervisor is responsible for overseeing the day-to-day operations of the warehouse and the people who work there. This person is at the top of the ladder regarding responsibility and importance in the Costco organization. You can expect to earn $25 per hour with excellent benefits and overtime pay, translating to more earnings.

As Costco’s customer service rep, you’ll be responsible for assisting members with questions or concerns about their memberships or purchases. You’ll also help customers find what they’re looking for and resolve any issues during transactions.

This entry-level position doesn’t require special skills or training beyond basic computer skills and knowledge of retail operations. The pay is good — around $18 per hour — but with few benefits.

While working as a cashier, you’ll scan items at checkout and process payments from customers who have already paid for their purchases. As a cashier, you’ll need to have strong customer service skills. You also need basic math skills to calculate markdowns and refunds quickly when necessary. Costco cashiers earn an average of $15 per hour.

As a customer service supervisor, you’ll be the go-to person for any problems with purchases or merchandise. You’ll have access to the store’s records, issue refunds, check stock, and help customers who have issues with their purchases. You’ll also oversee the cashiers and make sure all transactions are going smoothly and quickly. Costco’s customer service supervisors earn an average of $22 per hour.

The food court attendants at Costco are some of the most underappreciated employees. They work long shifts, often at night and on weekends, and they’re up against hungry and impatient customers. As a Costco food court attendant, you’ll be earning $14 per hour.

To work in this position, you have to unload and stock the large shipments that come into the store every night. This job requires heavy lifting, bending, and pulling—and it’s hard to find time to take a break from it all.

The work is hard and tiresome, and since you work overnight shifts, your sleeping schedule will suffer. Costco’s freight associates make $17 per hour.

Being a stocker at Costco is a classic entry-level position. It’s a job that’s easy enough to get if you are interested in working at the store, but it can be grueling if unprepared for it.

In this position, you’ll spend your entire shift on your feet. Depending on how busy Costco is or the size of your assigned area, you could be walking up and down those aisles all day. You’ll make $15 per hour in this position.

If you’re looking for a job that requires little effort and offers the opportunity to socialize with fellow employees, then cart attendant is the job for you. The downside is that it’s the most physically demanding position in the store, so be prepared for heavy lifting.

You spend all day pushing carts around and occasionally unloading trucks. Sometimes you have to deal with angry and unappreciative customers who always seem to on a hurry. Costco’s cart attendants make $15 per hour.

Cleaners work with different chemicals, including disinfectants and fragrances, and they have to scrub floors with mops and brooms that can be pretty heavy. They also have to clean up spills on the floor and wipe down glass doors and windows. The hours and pay aren’t great either — at $13 per hour at most locations.

Do Costco Employees Get Paid Well?

Costco pays its employees well. The average Costco employee salary ranges from $17 to $21 per hour, depending on the position.

In addition to their salaries, Costco employees receive benefits such as affordable health insurance (for full-time employees), company-sponsored retirement plans, and overtime pay. Below are some of the employee feedback regarding Costco salaries. 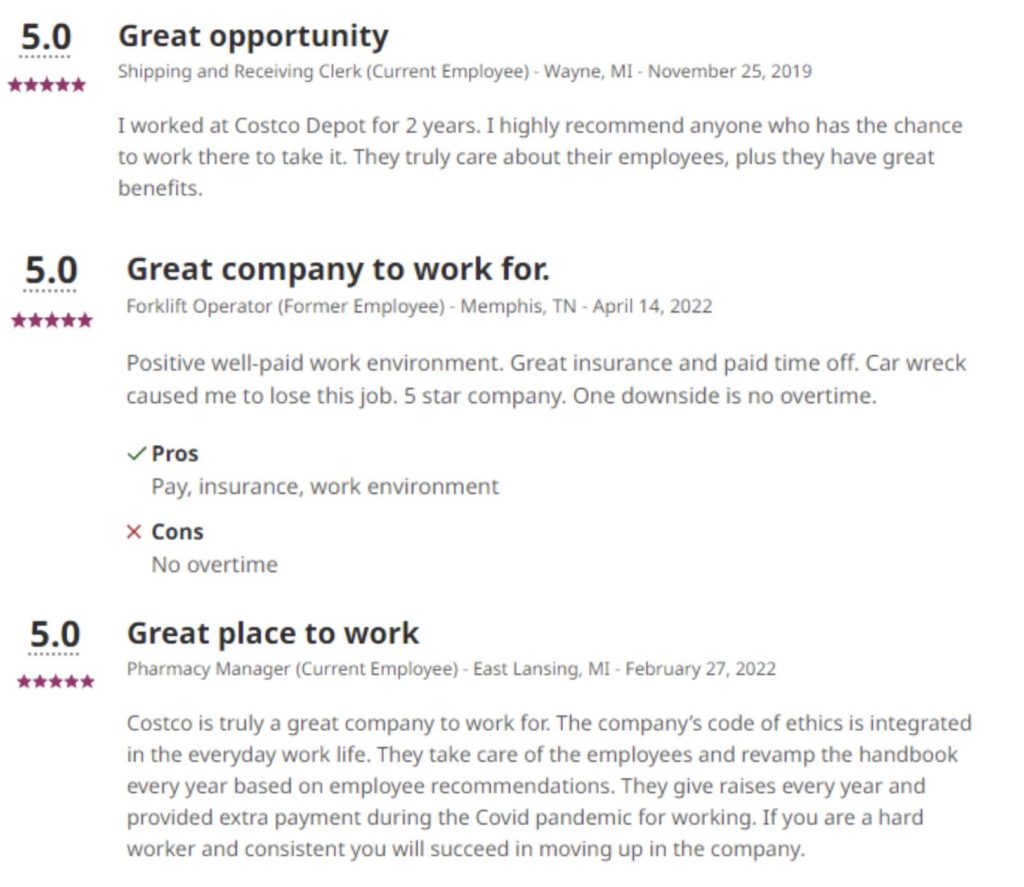 5 Reasons Why Costco Pays So Well

Costco has one of the lowest employee turnover rates in the country at just 6%. This means that most employees stay with the company for years and thus receive regular salary increases.

Costco has flexible scheduling rules which allow employees to plan their hours around their needs as long as they work at least 20 hours per week. It gives employees the time for doctor’s appointments or family emergencies without worrying about losing paychecks or being penalized by management.

Costco doesn’t advertise in the traditional sense — it doesn’t have to because it’s already well known for its low prices and quality merchandise. Therefore, it can afford to pay its employees higher wages than other retailers without additional expenses from advertising costs.

Costco doesn’t require its employees to sell a certain amount of products each week or month to meet sales quotas and receive raises or bonuses. That means they’re free to spend more time helping customers find what they need instead of worrying about their numbers.

With an annual revenue of approximately $141.4 billion in 2021, Costco can afford to pay its employees better salaries. Its sales have grown significantly, while most competitors have struggled to stay afloat due to competition and changing consumer trends.

Many factors have also contributed to Costco’s success, including its exclusive brands and membership model. It also helps that the company has been able to pay its employees more generously than its competitors without suffering from decreased profits or customer satisfaction.

Costco pays its employees bonuses. According to its website, they provide “twice-yearly extra checks (bonuses) for long-tenured hourly employees.” The amount of payments depends on store performance and the employee’s tenure with the company. Costco also offers other benefits such as health insurance, 401(k) plans, and stock options for management employees.

What is the easiest job at Costco?

The easiest job at Costco is front end assistant position. It’s an entry-level job that requires you to be friendly, courteous, and helpful. A Costco front-end associate’s primary responsibility is to greet customers and help them find what they are looking for.

What is the starting pay at Costco?

Do Costco workers get a free membership?

Costco employees get a free membership. If you get hired as a seasonal worker, you receive a standard membership which is later upgraded to an executive membership if you stay longer. You also get an additional three membership cards for your friends and family.

Do Costco employees get discounts?

Costco employees do not get employee discounts. Those who work at Costco pay the same prices for items just like other Costco members. However, employees can use Costco’s other benefits, such as coupon codes and free memberships, to make savings.

What is the dress code at Costco?

The dress code at Costco is casual and comfortable. The only thing you have to remember is not to wear clothing with holes. You can wear whatever you like as long as it doesn’t have any offensive language or graphics on it.

How long are shifts at Costco?

Why does Costco pay more on Sundays?

Costco workers get paid 50% more on Sundays than any other day of the week. It pays more on Sundays because more people tend to shop, so there is always huge traffic keeping the employees busy all through.

In most departments, Costco pays higher salaries than the national average. According to Careerbliss, the vice president of retail sales make the most money at Costco at $201,000 annually.

The average salary of a Costco wholesale manager is $73,752, which is 17% more than the national average. Costco cashiers are among the lowest-paid employees making $25,000 to $34,000 per year. When working at Costco, your salary will differ depending on experience, job type, and location.

What Does Costco Do With Returns?