If you’re a seasoned TikTokker or just someone who spends a lot of time following food trends online, then you might have heard about hot chocolate bombs. In the past couple of years, these novel sweet treats have become all the rage with online food influencers, and major grocery suppliers like Costco have caught onto the buzz. 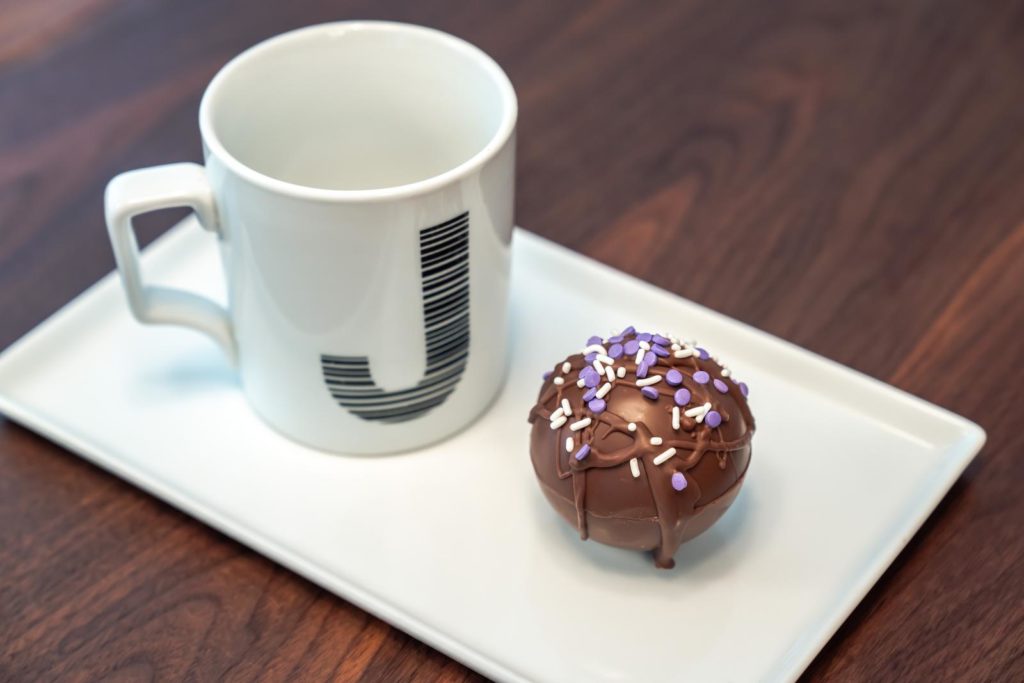 Costco’s Hot Chocolate Bomb are a seasonal product, so there is no current listed price for these decadent treats. However, as of 2021, each box of 20 hot chocolate bombs was priced at $17.99.

What’s even better is that the 20-count box easily breaks down into four giftable packs of five hot chocolate bombs.

Never heard of a hot chocolate bomb? Honestly, we hadn’t either until we discovered these! Hot chocolate bombs are a fun and trendy way to make hot chocolate, best described as a hollow ball of meltable chocolate filled with surprise ingredients such as marshmallows and more.

To prepare a hot chocolate bomb, simply drop it into a mug of hot milk and watch as it melts and reveals all of its chocolatey goodness.

Each time Costco releases a new edition of their hot chocolate bombs, the flavors vary, so there’s no telling what flavors will be released in 2022.

Past flavors of BomBombs Hot Chocolate Bombs have included:

Let’s be real: is hot chocolate ever really healthy? Probably not. But how do Costco’s BomBombs measure up?

Each hot chocolate bomb contains 140 calories, 9 grams of fat, 23 grams of sugar, 20 mg of sodium, and 25 grams of carbohydrates.

Hopefully the flavor is worth it!

The ingredients for Costco’s most recently available hot chocolate bombs (2021) include:

Ingredients vary slightly by flavor. These ingredients are for the s’more flavor.

How To Use Costco’s Hot Chocolate Bombs?

To prepare a delicious, festive beverage with your BomBombs Hot Chocolate Bombs, simply follow these steps:

Unfortunately, as much as we want to get excited about these, Costco’s BomBomb’s Hot Chocolate Bombs are getting pretty bad reviews online.

Apparently they don’t actually contain any hot chocolate mix, so the chocolate flavor comes entirely from the casing, which doesn’t exactly make for a rich cup of hot chocolate.

For good measure, here’s one positive review we found, but it still doesn’t exactly sell us on the idea:

Do hot chocolate bombs need to be refrigerated?

No. Just be sure to keep your hot chocolate bombs away from a heat source, as they can melt. Keeping them in the refrigerator can be a great way to ensure they stay fresh and do not melt, but it is not necessary.

Do you use milk or water for hot chocolate bombs?

Hot chocolate bombs are typically added to warm milk or coffee; however, you can certainly use water if you prefer.

Yes. Some of Costco’s hot chocolate bomb varieties contain small marshmallows inside that release into your beverage as the outer casing melts.

Well, there you have it. While hot chocolate bombs might be a great idea in theory, it sounds like the BomBombs available at Costco look and sound a lot more delicious and fun than they actually are. Chances are, they’ll be a lot more fulfilling for kids who might not be as concerned with the richness of the chocolate flavor. So, they could still work well as a gift during the holidays.

Why Are Maui Jim Sunglasses So Cheap at Costco?