Chocolate cake is undeniably one of the most classic and beloved desserts of all time. I mean, who doesn’t love a big piece of rich chocolate cake, right? I know I can’t resist it. But chocolate cake has been a hot topic discussion on the Costco scene these past couple of years.

Keep reading to find out the latest scoop on Costco’s famous chocolate cake. 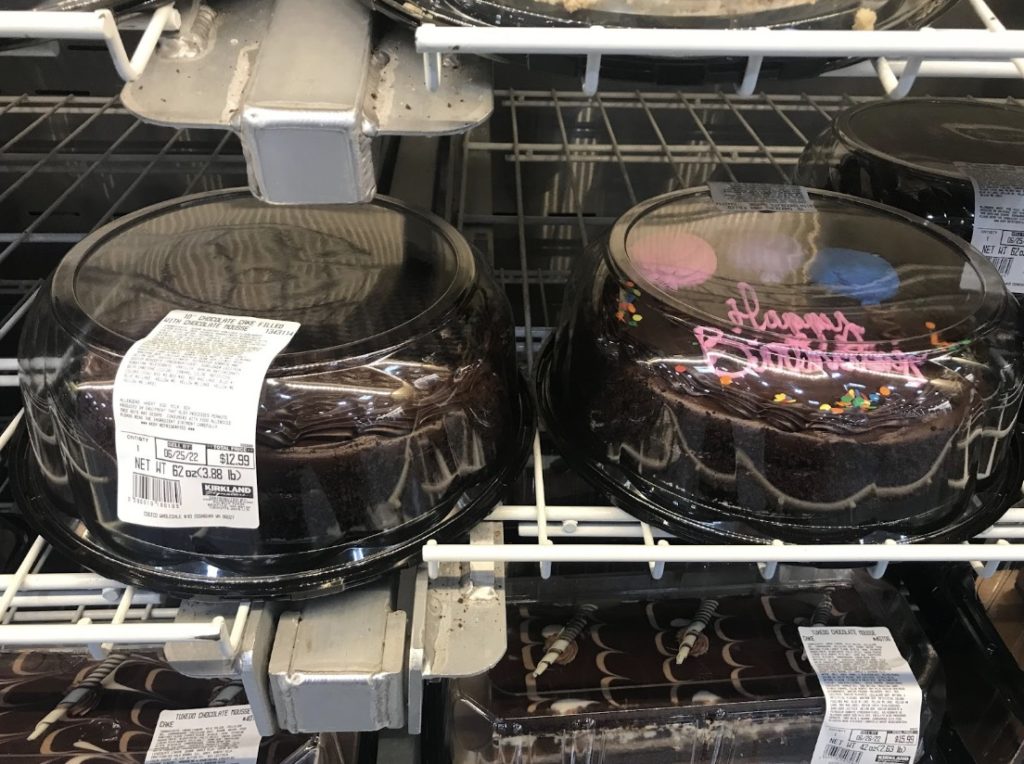 First off, we’ll give you the good news: Costco still sells chocolate cake.

The bad news? It’s not the same chocolate cake they were once known for.

Now, it’s not completely clear why Costco still hasn’t brought back their legendary All-American Chocolate Cake, which they discontinued in 2020.

The reason they decided to discontinue this cake was due to the Covid-19 pandemic. Costco also stopped selling sheet cakes during lockdown to dissuade large gatherings and because, well, they were losing money.

But now that the pandemic lockdowns are over, I’d be willing to bet that Costco will at some point start making their All-American Chocolate Cake again. Unfortunately, the company has made no mention of when this might happen.

Thankfully, they did start selling a miniature version of this popular cake in 2021, which continues to be available at the Costco bakery. Supplies may vary by warehouse location, but Costco is currently selling 6-count packs of cupcake-size All-American Chocolate Cakes as well as a slightly larger single-cake version.

The larger mini cake has been described as “smaller than the original cake but bigger than a muffin” by Eat This, Not That! These are currently priced at $7.99.

Now that we’ve cleared all that up, let’s get back to this good news. Costco still sells a 10” round chocolate mousse cake in their bakery for $12.99. These cakes are available both plain and decorated, as you can see in the picture above. And as usual, Costco’s cakes can be custom ordered with at least two days notice if you’d like a specific decoration theme.

Don’t cry for too long over the disappearance of Costco’s full-size All-American Chocolate Cake. There are so many great back-up options to choose from!

Here are some alternatives to that long-lost cake:

How Many Calories Are In A Costco Chocolate Cake?

While the calorie and nutrition information is not listed on the label of Costco’s chocolate mousse cake, we tracked down Costco’s guide to their bakery items’ nutritional information thanks to one Reddit user.

According to this table, Costco’s Chocolate Mousse Cake contains 390 calories per serving (1/16th of the cake). Each serving contains 18 grams of fat and 45 grams of sugar. 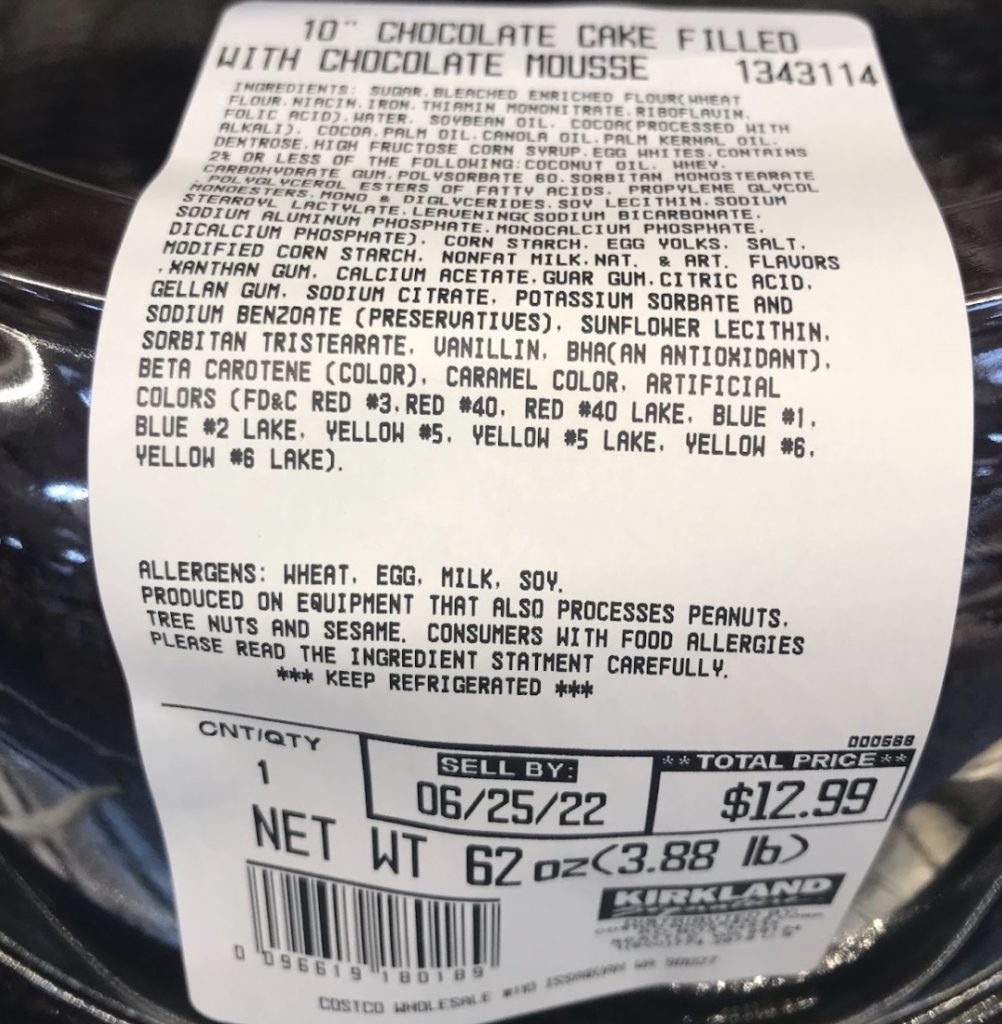 When it comes to the All-American Chocolate Cake varieties still available at Costco, the positive reviews are abundant. The Kitchn calls the mini cake “(almost) better than homemade.”

But when it comes to the cake that has replaced the full-size All-American Chocolate Cake, the reviews unfortunately aren’t as glowing.

Reddit users are weighing in, too, comparing the mousse cake to the much-loved All-American Chocolate Cake: 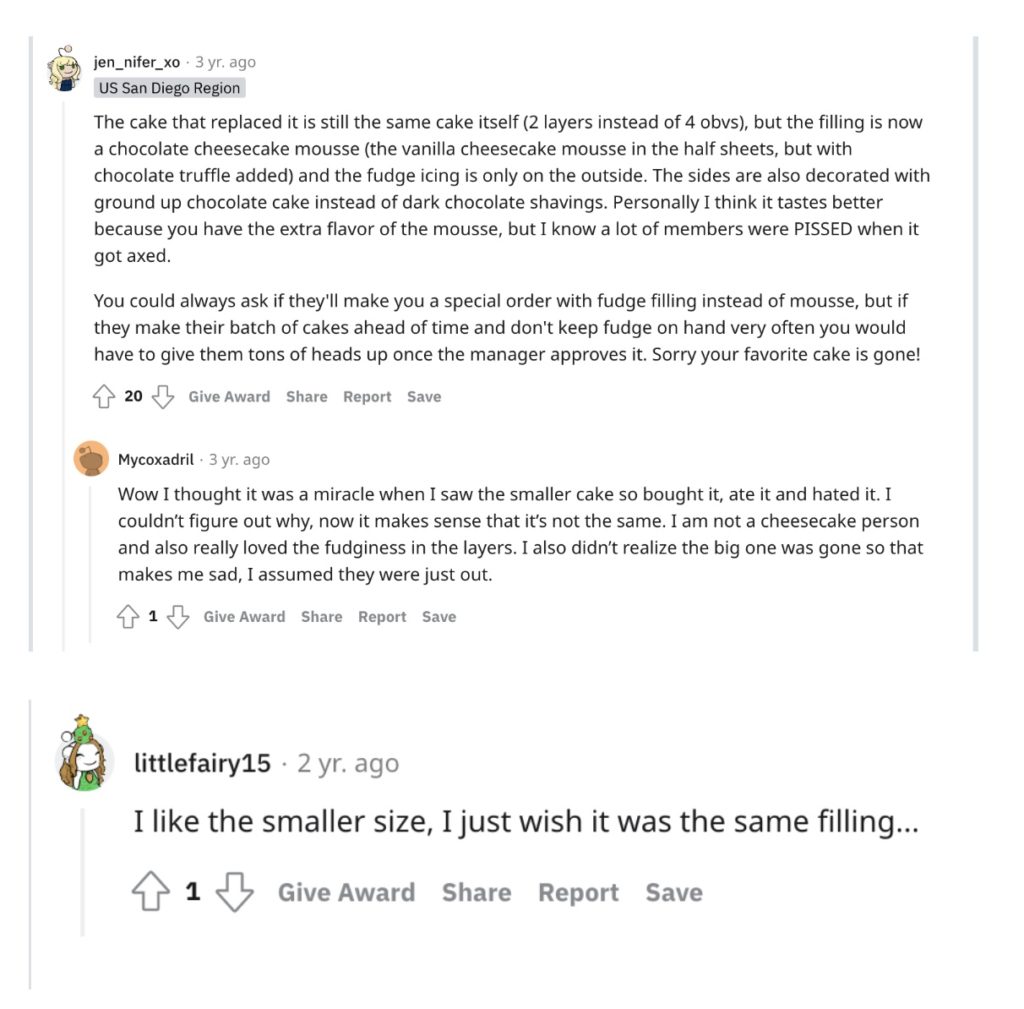 If you’re buying a chocolate cake for a birthday party, you could go with the 10” mousse cake or opt for a chocolate half-sheet cake for just a few dollars more. If what you’re after is flavor, then I’d recommend going for the smaller decadence of the All-American mini cake or cupcakes.

How many servings are in a Costco chocolate mousse cake?

How long is Costco chocolate cake good for?

Chocolate cake should be expected to last for about a week. Due to the high content of sugar, chocolate cake is likely to dry out and get stale before it molds. Still, because chocolate cake contains dairy and eggs, it should always be kept in the refrigerator.

How many inches is Costco chocolate cake?

Does Costco chocolate have nuts?

No. However, it is produced on equipment that is also used to process peanuts, tree nuts, and sesame seeds.

Does Costco chocolate cake need to be refrigerated?

Yes. Costco’s chocolate cake is sold in the refrigerated section of the bakery and should be stored in the fridge at home, too.

Despite discontinuing their famous All-American Chocolate Cake in 2020, Costco is still selling a wide variety of chocolate cakes in various types and sizes. They sell mini cake and cupcake versions of the All-American cake for just $7.99.

The 10” chocolate mousse cake has assumed the throne as the main Costco chocolate cake, and it’s priced a few dollars cheaper than its predecessor. Unfortunately, it doesn’t have quite as much of a fan following, as many customers miss the richness and size of the old cake.

Either way, chocolate cake is available in abundance at Costco, and at impressively low prices as usual.

Does Costco Have Motorized Carts for Customers?

Does Costco Still Have Dental Insurance?

What Days of the Week Does Costco Restock?