Have you ever wondered how Costco manages to charge such low prices for their gasoline? If so, we’ve got you covered. We’ll go over how to find out how much gas costs at any Costco location as well as the real reasons why Costco gas is so affordable. Keep reading! 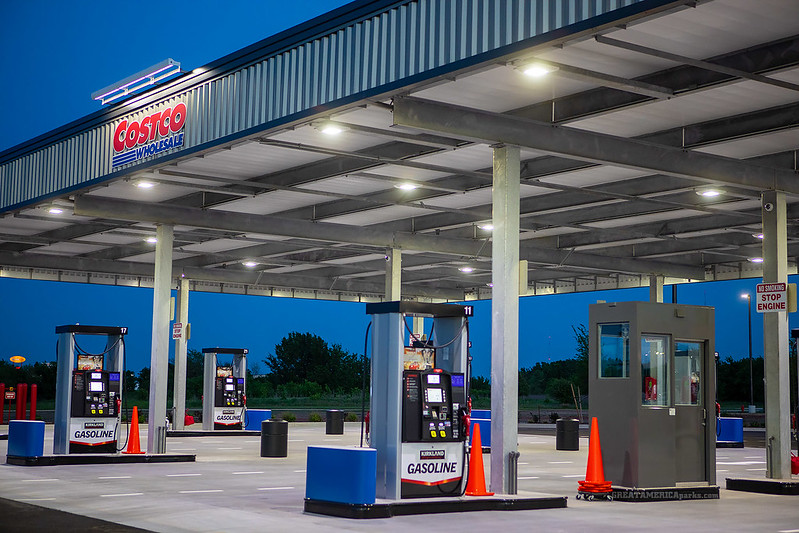 How Much Is Costco Gas?

While the cost of gas at Costco is generally lower than at most other fuel retailers, there is not a set price.

Gas prices at Costco vary by state, store location, time of year, etc. but on average Costco gas is cheaper than other gas stations by 5 to 15 cents.

In order to buy gas from Costco, you’ll need a Costco membership. The starting cost for a membership is $60 per year, with higher level memberships coming in at $120 per year. Once you have your membership card in hand, you can access the low gas prices at Costco.

To find out how much you can expect to pay for a gallon of gas at Costco today, use the “Find a Warehouse” tool on the chain’s website. In the search bar, type in your zip code or city and state, then select the store location you wish to visit from the list below. Beneath the store information, you’ll see a gas pump icon. All you have to do is click on this icon, and the store hours will appear with a listing of the gas prices below.

Here is a screenshot showing what it will look like when you search for your local Costco’s gas price. 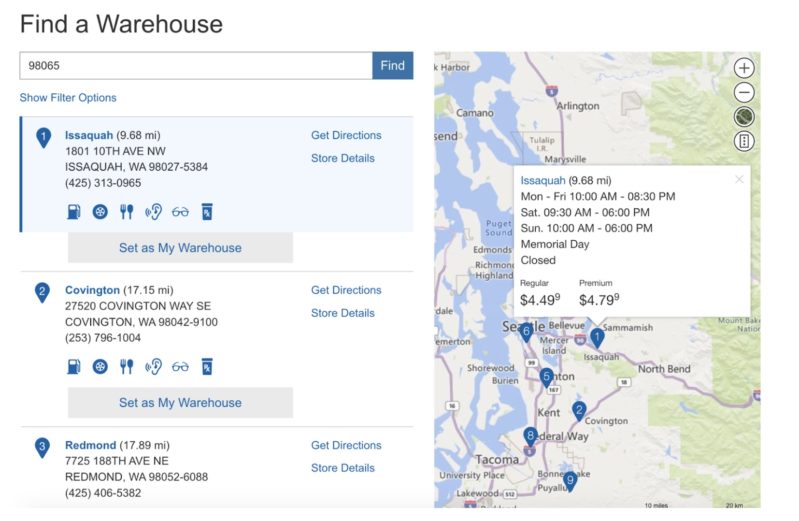 Here, you can see that a gallon of regular gas at the Costco location in Issaquah, Washington, is currently $4.49. This is about $0.25 cheaper than the current market average for the region.

Costco offers regular and premium gas at all of their locations, while some locations also offer diesel.

Why Is Gas Cheaper At Costco?

The reasons here are pretty simple. Mainly, everything is cheaper at Costco because the company gathers membership fees from all of its shoppers. In fact, memberships make up 75% of the company’s profits. So, with all that money coming in up front, Costco can afford to charge a little less at the pump.

The other reason why Costco can offer rock-bottom prices on their gas is because most shoppers aren’t just buying gas. On top of being members, people filling up at the Costco pump are likely to do a bit of shopping at the warehouse as well. Costco entices customers to their locations by offering affordable fuel and trusting that their customers will visit the store to load up on other things as well, like bulk items and home goods. It’s all about customer loyalty with this chain.

Does Costco Have High-Quality Gas?

Don’t worry about the quality of Costco gas! Despite being so much more affordable than gas from other suppliers like Chevron, Exxon, or BP, Costco’s Kirkland Signature™ fuel is TOP TIER™ and even exceeds some EPA standards. This gasoline is formulated to clean your engine, help your car run like new, and maximize fuel economy. You can read all about Costco’s fuel promise here.

Benefits Of Getting Gas At Costco

There are so many benefits to getting gas at Costco. Here is a list of just a few:

For more thoughts on why you should buy gas at Costco, visit Costco’s 7 Reasons to Fuel Up at Costco Gas Stations.

While the perks are abundant, there are admittedly some downsides to buying gas at Costco.

Is Costco Gas Available For All?

One of the reasons why Costco gas is so affordable is because the company expects its customers to pay for a yearly membership. Without a membership or a Costco Shop Card (gift card), you will not be able to purchase fuel at a Costco gas station.

Can Non-Costco Members Get Gas?

Unfortunately, the general rule is that only Costco members can purchase gas at a Costco gas station. However, there is one loophole. If you have a Costco Shop Card (a gift card that can be purchased and loaded by someone with a Costco membership and then gifted to someone without a membership), then you can use that card to purchase fuel at Costco.

Who Can’t Get Gas at Costco?

Anyone who does not have a Costco membership, a Costco Shop Card, or a valid Visa debit or credit card will not be able to purchase gas at a Costco gas station.

Is a Costco Membership Worth It Just for Gas?

By most accounts, buying gas at Costco is more than enough to pay for a membership. Even if you only save $0.25 per gallon, it won’t take long for those savings to add up to $60, which is the price of the basic Costco membership.

Unfortunately, one of the drawbacks of relying on Costco for gas is that their gas stations aren’t open 24/7. Hours vary by location, but most Costco gas stations open at 6 AM and close at 9:30 PM.

Can you pay for Costco gas with cash?

No. Costco gas stations only accept Visa cards as payment.

No. Costco gas is considered TOP TIER™ and does not contain ethanol.

Absolutely! In fact, Costco gas stations are quite a bit safer than a lot of other gas stations. Costco employs safety attendants at all of their gas station locations, so there is always someone there to help if needed.

Overall, Costco is an excellent place to buy gas and shines above a lot of other fuel suppliers by leaps and bounds. There are a few drawbacks, like needing to have a membership and not being able to pay with cash. But when you compare these to all the perks, it’s easy to see why so many people choose Costco as their fuel stop.

How Much Does Costco Glass Repair Cost?

What Types Of Dumplings Does Costco Sell?