One of the reasons Trader Joe’s has remained such a popular grocery store over the years is that they consistently provide affordable vegan and gluten-free options for their loyal customers. And when it comes to gnocchi, finding a good gluten-free alternative isn’t always easy.

So, to fulfill everyone’s gnocchi cravings, Trader Joe’s offers their standby alternative–frozen cauliflower gnocchi. These frozen gnocchi are premade and only need to be heated through before serving.

Each bag of Trader Joe’s Cauliflower Gnocchi costs just $2.99 and can be found in the frozen foods aisle, typically located near the center of the store. 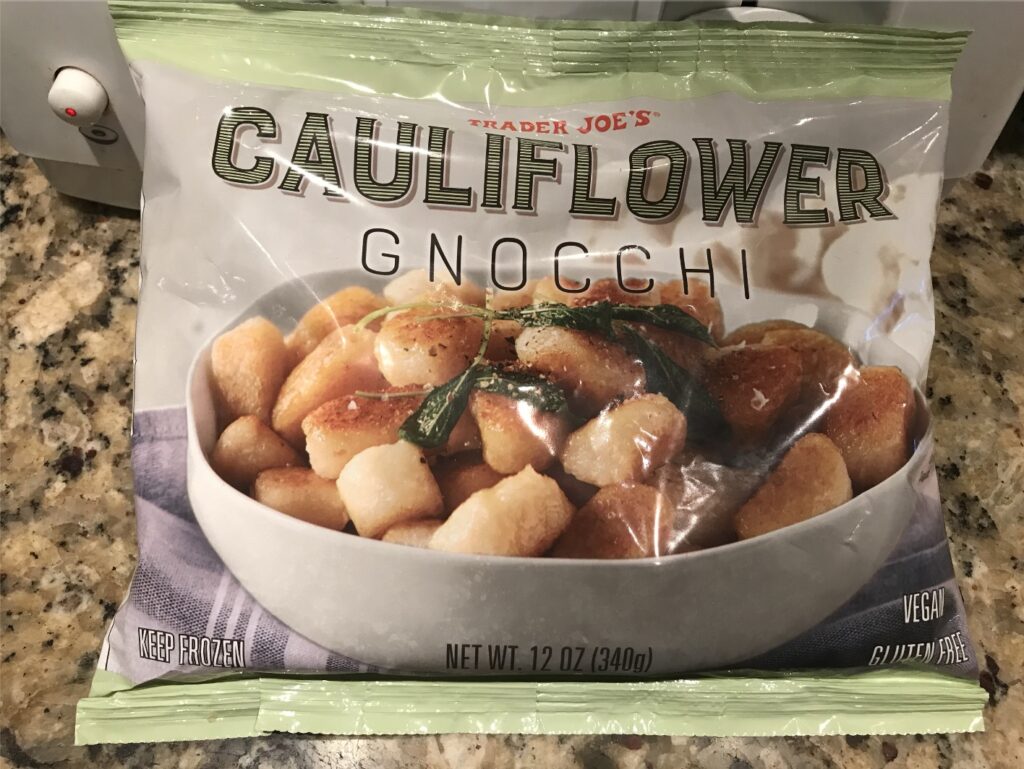 One of the things I like best about these simple gnocchi is that they only contain five ingredients–cauliflower, cassava flour, potato starch, extra virgin olive oil, and sea salt. There are zero preservatives, zero added sugar, and zero added flavorings in this gluten-free potato pasta.

If you’re wondering what “cassava flour” is, don’t worry–it’s gluten free. Cassava is a fibrous root grown in South America and used to make gluten-free flour. You can learn more about cassava and its potential health benefits here.

Each bag of Trader Joe’s Cauliflower Gnocchi claims to hold 2.5 servings, but I’d say it’s more like two servings (one if you’re really hungry, though I’d struggle to eat a whole bag of these in one sitting). 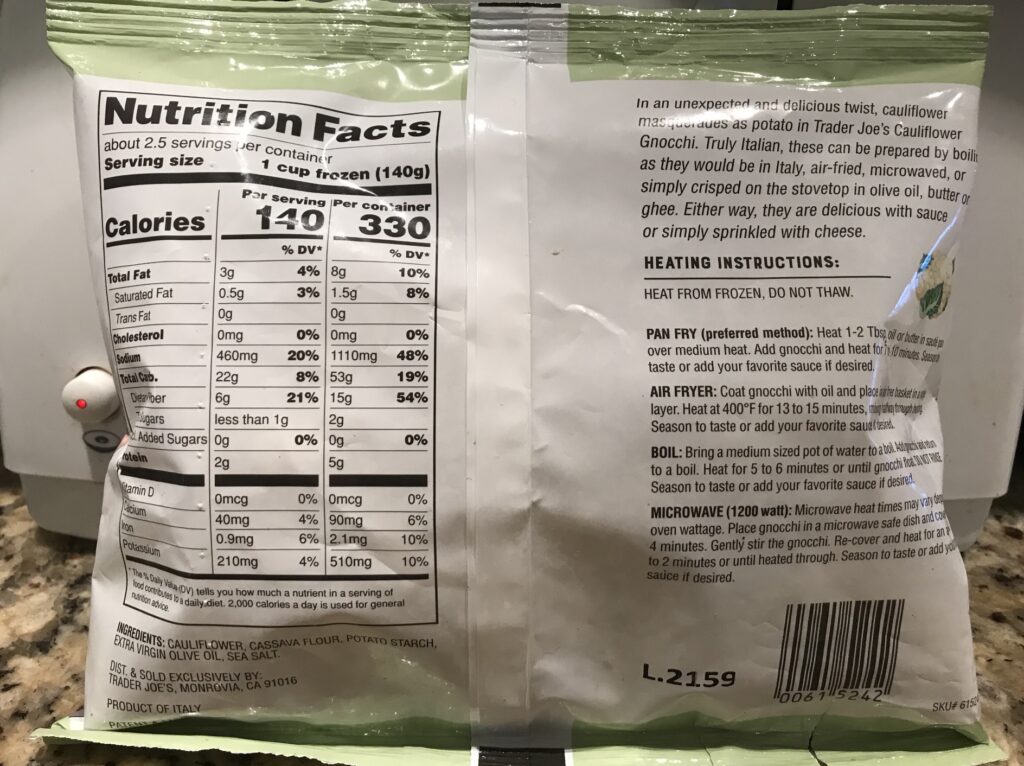 If you’re looking for a low-carb alternative to gnocchi, you’re going to have to keep searching. Even though these gnocchi are gluten free, they’re definitely not any less carbohydrate-rich than traditional gnocchi. They still contain potatoes and cassava, and both are very rich in carbs. Not to mention that cauliflower is also in the carb category.

In fact, did you know that most fruits and vegetables are primarily sources of carbohydrates? That’s right! Carbs aren’t all bad, people. We’ve been taught that carbs = sugar, baked goods, white bread, and white pasta. But this is a big misrepresentation of what carbs actually are and why we need them.

While simple carbs like processed flour and sugar should definitely be avoided as much as possible to maintain a healthy diet, the complex carbohydrates found in whole grains, vegetables, and fruits, are crucial to human health and must be consumed in healthy portions in order to maintain proper brain function and physical health. In other words–eat those carbs, honey!

When it comes to determining whether or not these cauliflower gnocchi are “healthy,” it depends on what factors you prioritize in your own diet. Some of the downsides of this TJ’s product are that it’s not organic, contains high levels of sodium, and doesn’t contain many vitamins or minerals. On the other hand, it’s made with more complex carbs than traditional gnocchi and only contains five simple, familiar ingredients (which also happen to be naturally vegan and gluten free). Considering all this, I’d say this stuff is on the healthier side, but shouldn’t be considered a superfood by any means.

If you eat according to the Whole 30 diet, rest assured that you can enjoy TJ’s Cauliflower Gnocchi without breaking any “rules.” Technically, though, these cauliflower gnocchi are not paleo-compliant, since they are a processed food and contain vegetable oil. They’re also not an approved keto food since they contain potato starch.

Upon first opening up my bag of TJ’s Cauliflower Gnocchi, I was unfortunately struck by a surprising smell. I don’t know about anyone else, but these frozen gnocchi honestly smelled a little bit like fish to me… just me?

Needless to say, I was a bit skeptical, but I knew the gnocchi were far from their expiration date, and I had kept them in the freezer since I bought them, so I figured it must just be an odd smell coming from the cauliflower (which can sometimes smell a bit strange before it’s cooked, similar to broccoli).

The instructions for cooking these cauliflower gnocchi list four different preparation methods–pan frying, air frying, boiling, and microwaving. I opted to boil them because it seemed easiest (and I prefer not to microwave things).

If you’re interested in microwaving your TJ’s Cauliflower Gnocchi, it’s as simple as removing the packaging, placing them in a microwave safe dish, covering them, and heating them in the microwave for about 4 minutes. Remove the dish, stir the gnocchi, then continue microwaving for 1-2 minutes or until heated through.

In my case, I followed the boiling instructions closely, adding the gnocchi to the water once it was at a full boil. When the gnocchi popped up and started floating, I immediately removed the pot from the hot burner and drained the gnocchi.

My first impression of the boiled gnocchi is that they were quite soft and didn’t have the same dense shape and texture that I’m used to from conventional gnocchi. 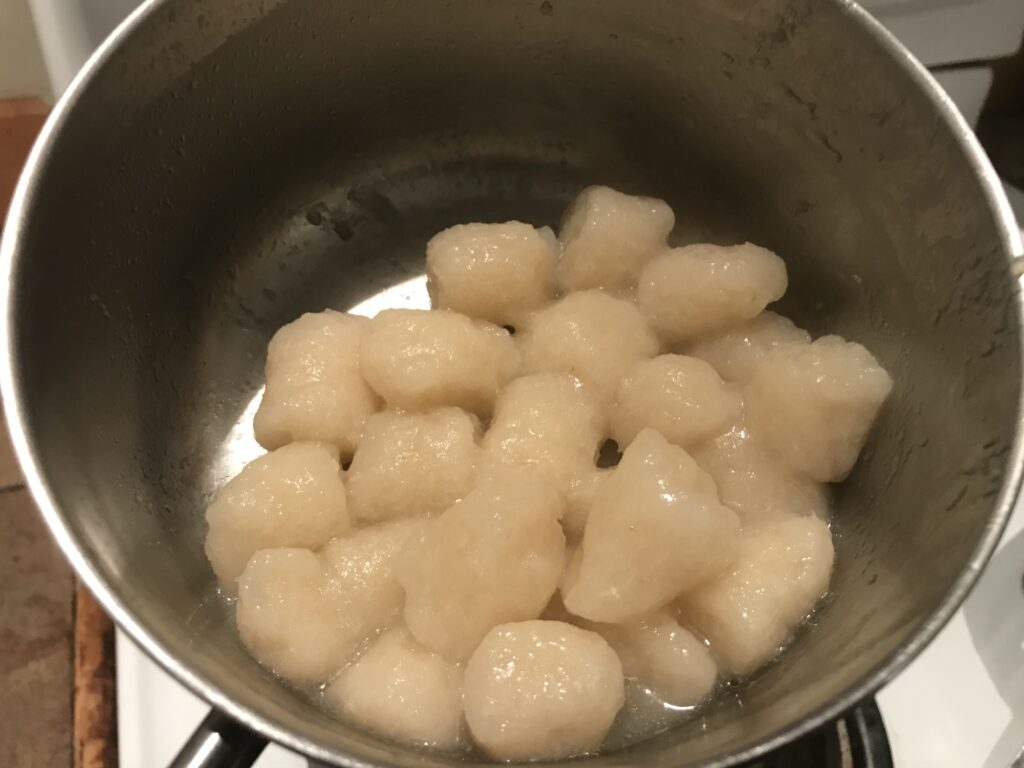 Like most gluten-free alternatives, these cauliflower gnocchi don’t hold their shape quite as well as traditional potato gnocchi, which contains wheat flour. Flour obviously contains gluten, which helps bind the gnocchi dough and retain its shape.

But without gluten, these cauliflower gnocchi have a softer, looser texture, especially when boiled. I suspect that pan frying would have been a better prep method to choose, as I think boiling softened the gnocchi too much.

If I were to make these again, I would definitely pan fry them, aiming to get a light browning on the outside for some crunch and flavor as well as to help hold their shape together.

To turn these boiled gnocchi into a proper meal, I decided to combine them with some chopped collard greens, lightly sauteed with some Trader Joe’s Organic Balsamic Vinegar, organic olive oil, salt, and black pepper. I also added in some grated Trader Joe’s Unexpected Cheddar Cheese at the very end to add some flavor. 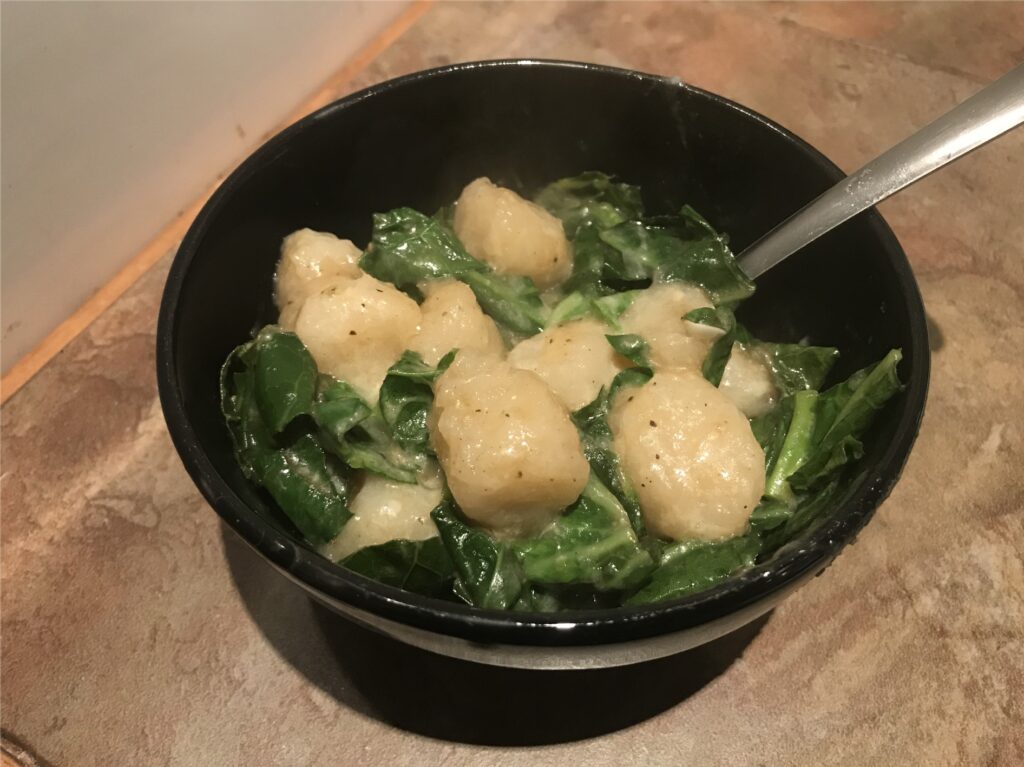 The finished result was super delicious, with the cheese bringing in a creamy, salty, and tangy flavor while the collards added an element of nutrition and texture. The cheese also melted in with the softness of the boiled gnocchi, forming an impromptu sauce which ended up working well. Overall, this was a nice lunch that I would probably eat again. (I’m also happy to report that the odd smell completely went away after they were cooked! Phew…)

The gnocchi itself doesn’t have a particularly strong flavor, so I definitely recommend combining them with a sauce, mixing in some vegetables, or at the very least topping them with some grated cheese (or a vegan alternative). What you get from the gnocchi is much more texture than flavor, but this can be true even of traditional gnocchi.

If you stick to a gluten-free diet and are looking for an alternative to traditional gnocchi, I’d say these cauliflower gnocchi from Trader Joe’s are a great option. But honestly, as someone who has no problem eating gluten, I’d personally opt for the real thing. The texture of these gnocchi is a bit on the soft and mushy side (almost gluey), while true potato gnocchi tends to be firm and chewy.

At the very least, I’d try pan-frying or air-frying my cauliflower gnocchi next time, because boiling them made them feel more like dumplings than gnocchi.

Trader Joe’s Cauliflower Gnocchi is inexpensive, easy to prepare, and a decent addition to any vegan or gluten-free diet. They’re not necessarily going to blow anyone’s socks off, especially if you’re used to traditional gnocchi, but they can make for a nice meal when combined with other ingredients.

What Types of Prosecco Does Trader Joe’s Carry?

What Kind Of Salmon Does Trader Joe’s Sell?

What Kind of Fried Rice Does Trader Joe’s Sell?