Trader Joe’s is a great source for Italian-inspired foods. In fact, TJ’s even has their own Italian branding name, Trader Giotto’s.

Pesto is available at Trader Joe’s in several different varieties, including traditional basil pesto and several other more modern takes. I can personally confirm that Trader Joe’s Pesto is super high quality, flavorful, and even a little bit addictive.

Trader Joe’s even has a vegan pesto option, as well as a red pesto tomato sauce. Keep reading to find out all about these delicious pesto varieties. 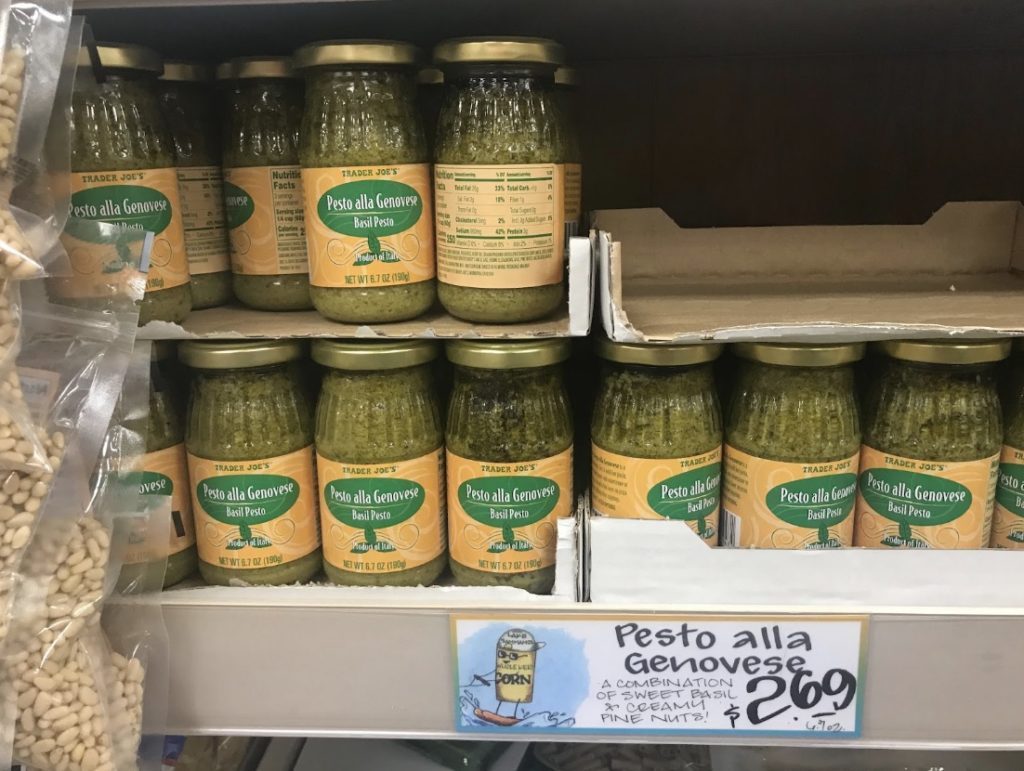 What Kind Of Pesto Does Trader Joe’s Sell? 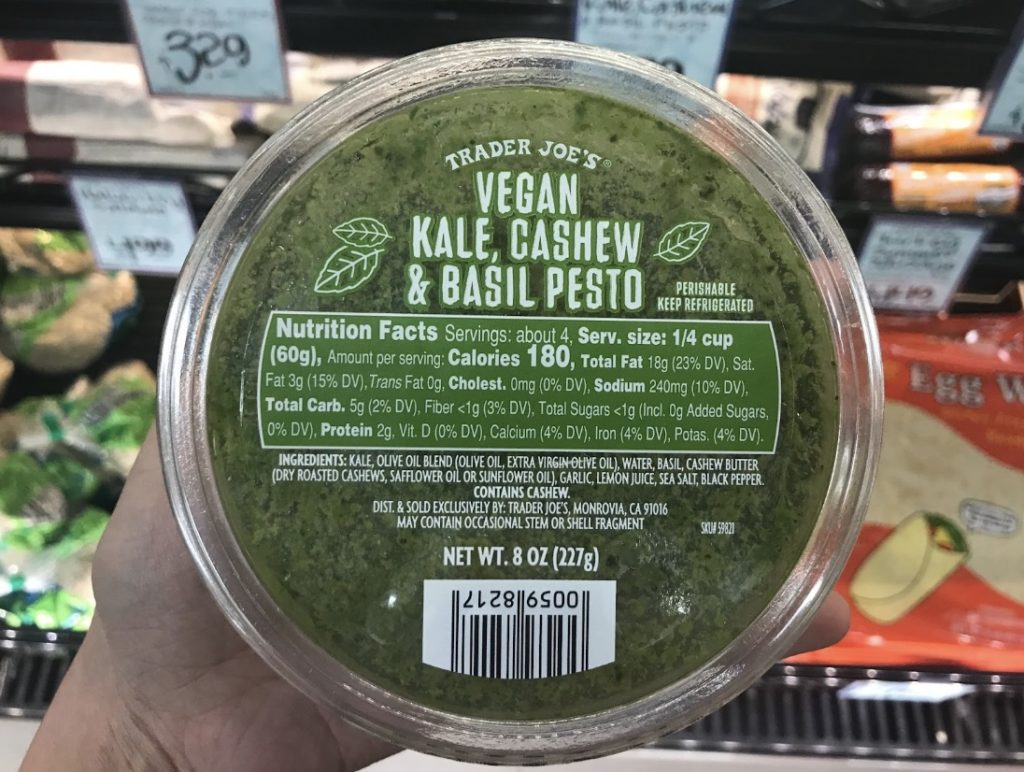 How Much Does Pesto Cost At Trader Joe’s?

One of the best things about buying pesto at Trader Joe’s is the low prices. Pesto is considered a specialty import product in most cases, so it’s not uncommon to pay between $5 and $10 for a small jar of Italian pesto. But not at TJ’s.

Here, you’ll find a table listing the prices for all three varieties of Trader Joe’s pesto. When it comes to tracking down the pesto at Trader Joe’s, it can be a bit tricky. Trader Joe’s shelf-stable pesto, including their Pesto Rosso and Basil alla Genovese, can be found in the same aisle as their salad dressing and other dips and sauces.

Trader Joe’s Vegan Kale, Cashew & Basil Pesto is not shelf stable and can be found in the refrigerated section near the other refrigerated dips and sauces.

Figuring out whether or not pesto is healthy comes down to looking at the ingredients list, sodium content, and fat content (if you’re concerned about fat intake, which not everyone is!).

Pesto is traditionally rich in oil (fat) and sodium, so don’t be surprised when you look at the numbers.

But does Trader Joe’s Pesto contain any unnecessary added ingredients? Let’s find out! 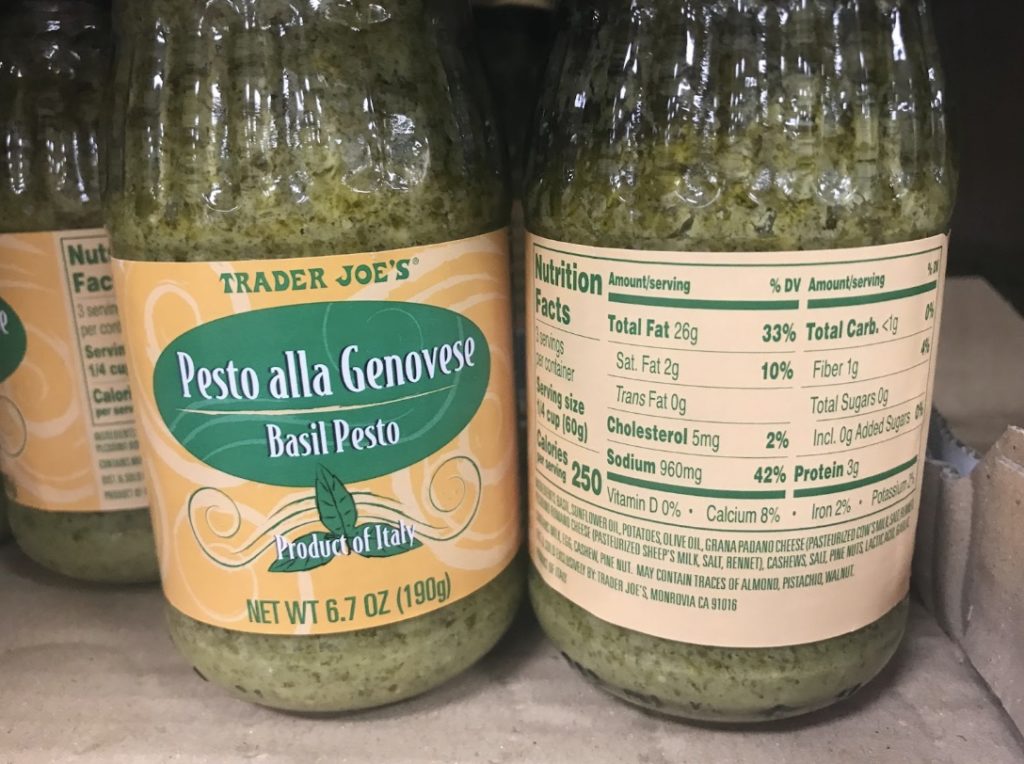 This Pesto alla Genovese has 26 grams of fat per ¼ cup serving, as well as 960 mg of sodium. Wow! That is definitely a lot of sodium, but remember that ¼ cup represents one third of the container. So, chances are you won’t be eating that much in one serving by yourself.

When it comes to the ingredients, nothing stands out as particularly concerning. There are no artificial preservatives, colorings, or flavorings and no added sugar. It’s too bad that this near-traditional pesto isn’t made with olive oil (it uses sunflower oil as a less expensive alternative). But other than that the recipe is fairly traditional. Vegans take note that this pesto contains dairy! It is, however, gluten free.

The Vegan Kale, Cashew & Basil Pesto has an even simpler recipe, containing no preservatives whatsoever and using real olive oil as its oil base. With its main ingredient being kale and having no sugar, fairly low sodium, no cholesterol, and barely any carbs, this pesto is super healthy! It’s also 100% dairy free and vegan.

With the exception of cornstarch (which is probably added to thicken the consistency), there’s nothing too unusual in this pesto sauce either.

Here’s a look at the nutrition facts: Overall, I’d say that Trader Joe’s Pesto is fairly healthy across the board, unless you’re trying to avoid fat, salt, or nuts. All three varieties are gluten free, and there’s even a vegan option.

Trader Joe’s Pesto alla Genovese is definitely the most rich, having quite a bit more fat and sodium than the other two options, and a longer ingredients list. But as long as you’re not eating your pesto in large quantities, all three of these options could be considered fairly healthy.

How To Cook Trader Joe’s Pesto

Pesto is a versatile food that can be used in both hot and cold dishes, as part of an appetizer or as a central component in a main dish. Pesto is also often served cold as a dip or spread.

Pesto on its own does not need to be cooked or prepared. When used in a recipe, it can be added as is as a flavor enhancer, sauce, or glaze.

Keep reading to find out how to use Trader Joe’s Pesto in some popular recipes!

If you’re looking for some recipe inspiration for your Trader Joe’s Pesto, look no further!

Here are some great recipes to try with your Trader Joe’s Pesto:

Trader Joe’s Pesto is a great buy, in my opinion. I’ve tried both the Pesto alla Genovese and the Kale, Cashew & Basil Pesto (which is my go-to), and they’re both amazing!

I love the Kale, Cashew & Basil Pesto because it’s thick, flavorful, and has a great texture. I also love that it’s made with olive oil, and I feel healthy when I eat it since it’s mostly made of kale. Despite being a non-traditional pesto, I find that it tastes pretty close to a true pesto. Definitely close enough to satisfy my taste buds.

The Pesto alla Genovese is definitely richer in basil flavor, plus it has parmesan cheese which adds flavor as well. It’s not quite as thick as the kale pesto, so I find that it’s better as a sauce for pasta rather than as a dip or spread.

But don’t just take it from me! Other customers are raving about Trader Joe’s Pesto alla Genovese, with some even saying that it tastes just like traditional Italian pesto. 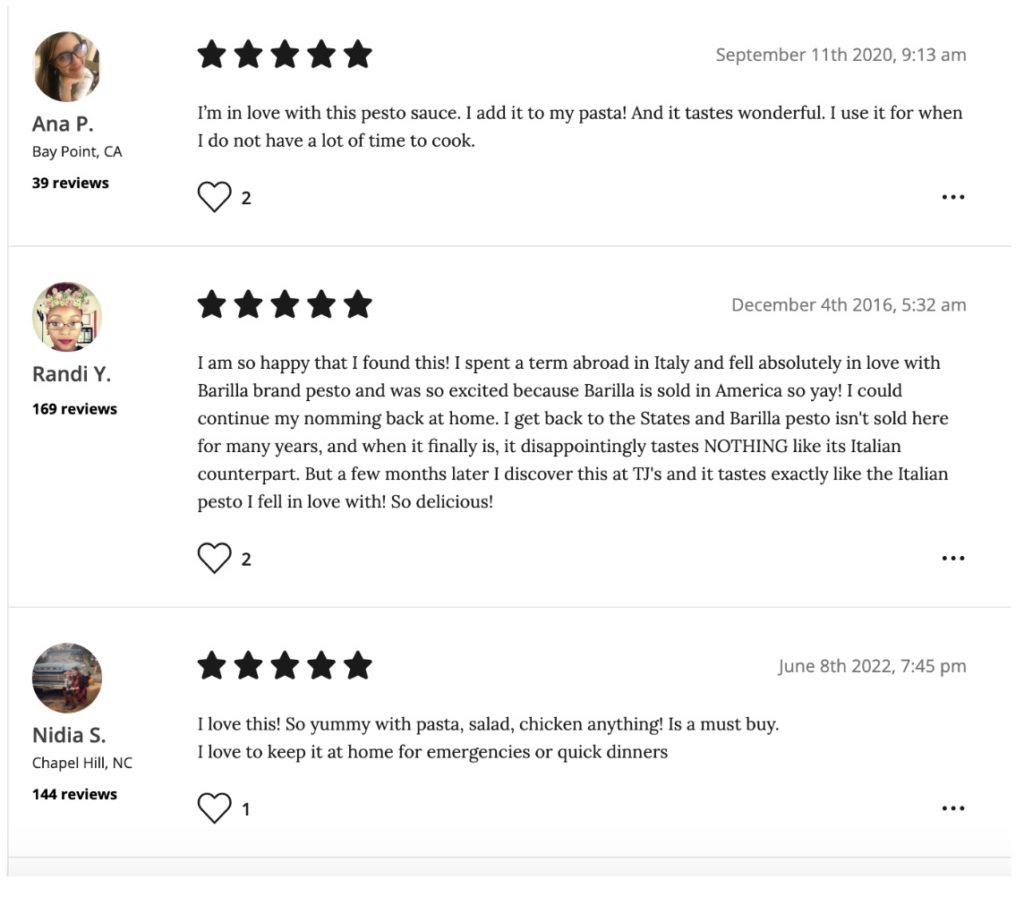 Can you freeze Trader Joe’s pesto?

Yes! Pesto freezes well and can be thawed at any time. However, Trader Joe’s Pesto alla Genovese or Pesto Rosso, which come in glass jars, should be frozen with caution. Glass can break when being transferred between extremely different temperatures, so make sure not to put a hot glass jar in the freezer, and never put a frozen jar directly into hot water to thaw. You could also transfer the pesto from its glass jar into a non-glass container before freezing to prevent this risk.

Does Trader Joe’s have vegan pesto?

Yes. Trader Joe’s Pesto alla Genovese (Basil Pesto) is made with pine nuts. However, they carry two other varieties that use cashews instead of pine nuts.

Trader Joe’s is a great place to buy pesto. With three different varieties, including a vegan option, Trader Joe’s Pesto ranges from rich and traditional to extra healthy. If you’re looking for a pesto perfect for dipping and spreading, try the Vegan Kale, Cashew & Basil Pesto, and if you’re a fan of tomato sauce, try the Pesto Rosso. Trader Joe’s Pesto alla Genovese is definitely the closest to a traditional Italian pesto, and it’s gotten rave reviews from customers (including me!). Plus, with prices under $4, it’s almost impossible to beat the pesto game at Trader Joe’s!

What Kind of Veggie Burgers Does Trader Joe’s Have?