Predating the advent of baker’s yeast, sourdough bread is one of the most traditional forms of bread out there. And since the surge in interest sparked by the Covid-19 pandemic, sourdough bread is now as popular as ever. Today, we’ll dive into the world of Trader Joe’s Sourdough Bread to find out how this bread measures up against other breads. 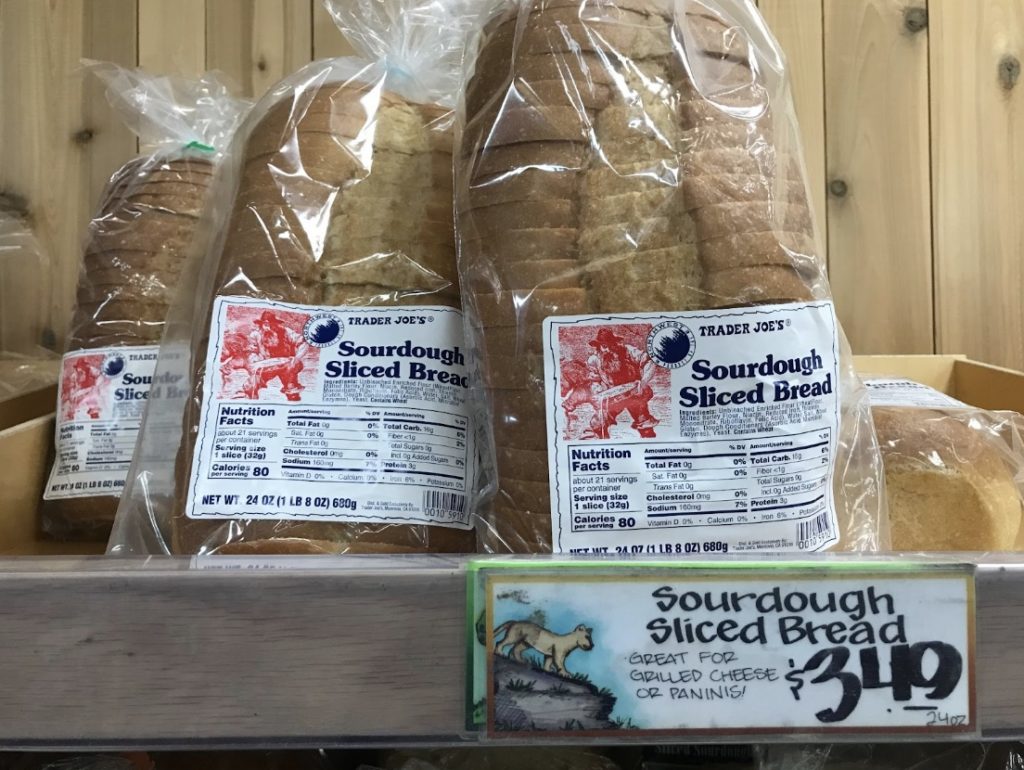 Does Trader Joe’s Have Sourdough Bread?

Sourdough bread is an ancient bread variety made from a sourdough “starter,” which is essentially just a mixture of bread flour and water that naturally harnesses yeast from the air to create its own fermentation process. While most modern breads are made by adding bread yeast to a recipe, sourdough doesn’t rely on the addition of yeast. The fermentation process of the starter leavens the bread naturally, while adding a delicious, slightly sour or tangy cflavor.

Now, onto the big question. Does Trader Joe’s sell sourdough bread? Yes! They absolutely do. In fact, they carry at least nine different varieties (as far as we can tell, though there might be even more).

In the past, Trader Joe’s also carried a multigrain version of their San Francisco-Style Sourdough. Unfortunately, many customers have reported not being able to find it in stores since 2021, so we suspect that it’s been discontinued. 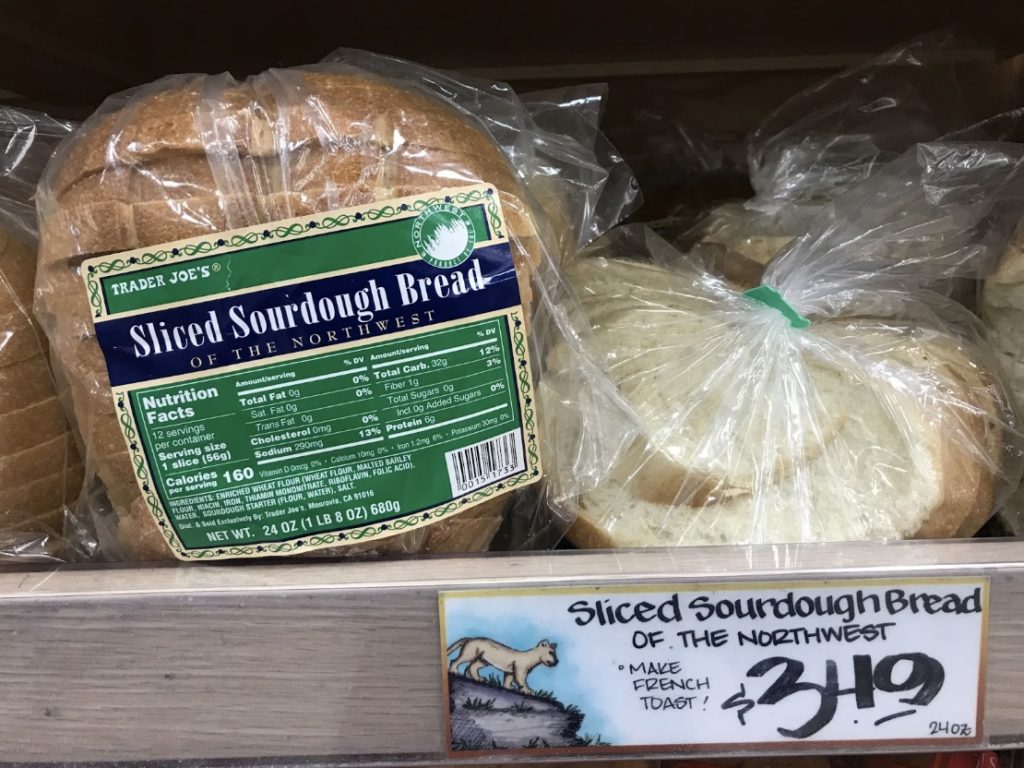 How Much Is Trader Joe’s Sourdough Bread?

Here, you will find a chart listing the various prices for each variety of Trader Joe’s Sourdough Bread.

Most of TJ’s breads are also made with enriched or fortified flour, which is not traditional of a sourdough bread recipe, although it doesn’t disqualify it from being considered sourdough.

Here, we will list the ingredients plus nutrition and calorie information for each of Trader Joe’s eight sourdough bread varieties.

Products with an asterisk (*) are considered true sourdough breads, in that they contain sourdough starter and do not contain added yeast.

See nutrition and calorie information in the table below.

As far as bread goes, Trader Joe’s Sourdough bread varieties are generally pretty healthy. They all contain very low sugar and some are even quite low in calories. The Sprouted Wheat Sourdough in particular is high in protein while being low in calories and carbs, plus it has a bit more fiber than most of the other varieties and a massive boost of potassium. The 100% Whole Wheat Sourdough Sandwich Bread is also one of the healthier sourdough offerings at Trader Joe’s.

Sourdough can be used in a number of different ways, but the most popular way is to use it for sandwiches. Sourdough can also be a delicious treat topped with some butter or jam or made into toast. Try spicing up your sourdough bread with some avocado and maybe a fried egg, or lathering on some hummus or another favorite spread.

Although wheat is generally best avoided in a low FODMAP diet, sourdough bread is known to be fairly well tolerated by people with these considerations. While excess amounts should still be avoided, Trader Joe’s Sourdough Bread varieties that stay true to the sourdough tradition (without too many additives or additional flours) should be considered okay on a low FODMAP diet.

One of the great things about Trader Joe’s is that they do not add artificial preservatives to any of their food, including their breads. So, this means that their bread will not last as long as some others you might be used to.

Some customers report finding mold on their bread within 2 days of purchasing, which sounds a bit extreme, but it’s certainly possible if your bread is stored outside of the fridge in a warm or humid area. To prolong the shelf life of your Trader Joe’s bread, keep it in the fridge and consider even storing it in the freezer.

Bread can keep well in the freezer and be removed as you need it, heating it in the toaster or the oven. Unfortunately, if you do keep it in the freezer, it won’t be as soft and tasty without toasting it.

No. Trader Joe’s does not carry gluten-free sourdough bread.

Yes. Trader Joe’s Sprouted Wheat Sourdough is quite healthy and is certainly the healthiest of the sourdough bread varieties they offer.

There you have it: everything you ever wanted to know about Trader Joe’s Sourdough Bread. Whether you’re looking for something simple to use for sandwiches or something dense and nutritious, you will certainly be able to find the perfect sourdough bread for you at Trader Joe’s.

Trader Joes Orange Chicken: Why It Should Be On Your Shopping List

Trader Joe’s Carne Asada: Everything You Need to Know