If you’ve never had oat milk, then it probably won’t taste just like regular milk to you. But as far as plant-based “milks” go, oat milk is actually pretty convincing. It’s thick, creamy, and rich in flavor just like real milk, and can be a delicious stand in for people who are vegan or lactose intolerant.

Released onto shelves in 2019, Trader Joe’s Non-Dairy Oat Beverage has somewhat mysterious origins. We’re not exactly sure who manufactures it under the TJ’s brand, but as far as quality goes, it often gets compared to the top tier of oat milks, Oatly.

The chocolate variety sells for $2.69 for the same size. 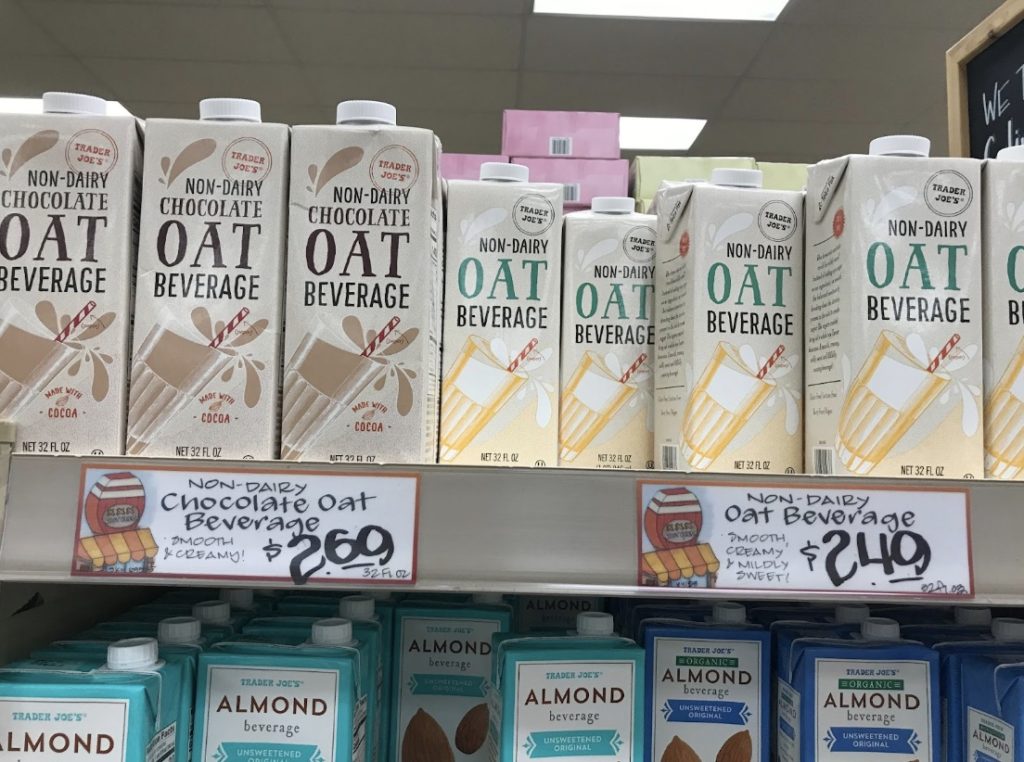 Things get a little confusing when some suppliers call their oat beverages “beverages” while others call them “milk.” But at the end of the day, “oat beverage” and “oat milk” mean essentially the same thing.

Some suppliers choose to market their oat beverages without the use of the word “milk” since milk technically comes from animals and may be a turn off for some vegan shoppers.

Some oat beverages also have slightly more complex recipes than basic oat milks, which can sometimes be as simple as containing just oats and water.

What Is In Trader Joe’s Oat Milk?

From looking at this list, this oat beverage appears to contain zero added sugar However, the manufacturing process involves breaking down the starches in the oats to unlock their natural sugars.

So, Trader Joe’s Non-Dairy Oat Beverage does technically contain added sugar that would not be present in a less-processed version.

In 1 cup of Trader Joe’s Non-Dairy Oat Beverage, you will consume:

For reference, let’s compare this to the nutrition present in 1 cup of whole fat cow’s milk:

As you can see, Trader Joe’s Non-Dairy Oat Beverage is lower in sugar, fat, and calories than regular milk, despite being higher in carbs and also lower in protein. You also get some fiber from drinking oat milk, which is always a plus for a healthy diet.

Note: the refrigerated version of this beverage, available at some TJ’s locations, includes a few additional ingredients, including xanthan gum.

From what we’ve gathered, Trader Joe’s Non-Dairy Oat Beverage still hasn’t quite lived up to the reputation of Oatly.

Oatly is known for being thick, creamy, and tasting as close to cow’s milk as you can get while still being 100% vegan.

Trader Joe’s version does get points, though, for being both cheaper and having fewer ingredients.

Overall, Trader Joe’s Non-Dairy Oat Beverage seems to be fairly well liked, though admittedly less so than some of the longer-standing oat milk choices like Oatly.

We did find one reviewer though, from Daily Waffle, who actually voted for Trader Joe’s Non-Dairy Oat Beverage over Oatly in certain situations, noting that the refrigerated variety is a little better than the shelf stable version.

If you’re curious about TJ’s Non-Dairy Oat Beverage and its capacity to get frothy in a milk steamer, I have found that oat milk is generally one of the easier plant-based milks to make foam with.

In my years working as a barista, I got tons of experience foaming (or attempting to foam) many different types of milk, including cow’s milk, coconut milk, hemp milk, almond milk, and oat milk. I feel like I can speak for baristas everywhere in saying that oat milk and hemp milk are definitely the easiest to make thick, silken foam with for lattes and cappucinos.

Does Trader Joe’s oat milk need to be refrigerated?

Before being opened, Trader Joe’s Non-Dairy Oat Beverage is shelf stable until its expiration date. However, once the container has been opened, it should be stored in the fridge and used within 7 to 10 days.

Why is Trader Joe’s oat milk so thick?

Oat milk is thick due to the naturally occurring starches in oats that are released overtime in liquid. Trader Joe’s Non-Dairy Oat Beverage also contains a small amount of sunflower oil.

No. Trader Joe’s Non-Dairy Oat Beverage does not contain any carrageenan or other thickeners.

No. Trader Joe’s only sells two varieties of their Non-Dairy Oat Beverage, which are plain and chocolate. However, TJ’s oat milk can be used to make steamed coffee beverages.

Before being opened, Trader Joe’s Oat Milk will last through its marked expiration date. Once it has been opened, it should be used within 7 to 10 days and stored in the refrigerator.

Are hydrolyzed oats safe to eat?

Yes. Hydrolyzed Oats are simply oats that have been split with water molecules. Hydrolysis is considered a natural process.

If you’re a fan of oat milk, then I’d say TJ’s Non-Dairy Oat Beverage is definitely worth trying out. The simple fact that it gets talked about in the same breath as the almighty Oatly is enough of a reason to give it the taste test. And at almost half the price, Trader Joe’s version could grow on you pretty easily.

Trader Joe’s Olive Oil: Why You Need To Get Your Hands On It

Why Do They Ring the Bell at Trader Joe’s?