Let’s take a minute to talk about one of the most delicious frozen food items to come from Trader Joe’s— Trader Joe’s Soup Dumplings!

I don’t know about you, but Trader Joe’s soup dumplings are one of our must-haves every time we shop at TJ’s…and we shop there a lot!

Soup dumplings are a specialty food that is almost impossible to recreate at home, and often can be hard to come by in Chinese restaurants, which are also known as Xiao Long Bao. 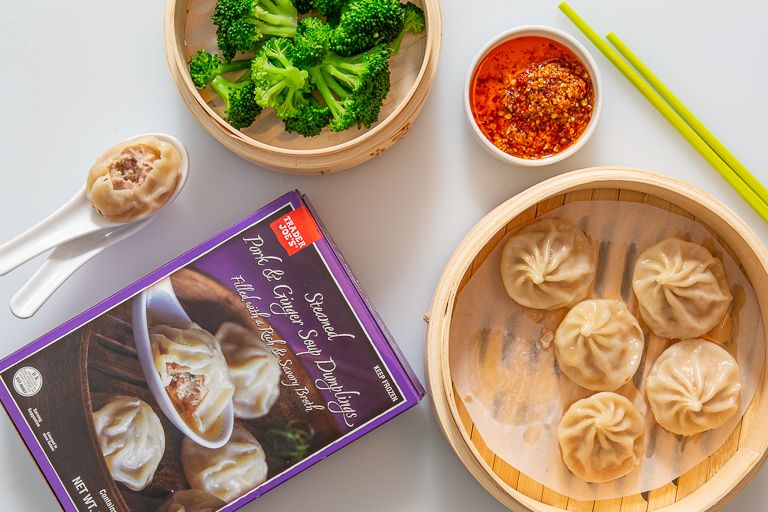 Does Trader Joe’s Have Soup Dumplings?

Yes! — Thankfully for all of us, Trader Joe’s offers soup dumplings in their frozen foods section for $3.49 per 6oz box.

According to the Trader Joe’s website, their soup dumplings are “inspired by the same original soup dumplings, xiao long bao, that originated in the Jiangsu province of China, this type of dumpling is traditionally prepared in a xiaolong, the small bamboo steaming basket from which it gets its name. In English-speaking countries, they’re most often called Soup Dumplings because they are filled with hot soup (and therefore must be eaten carefully!)”. 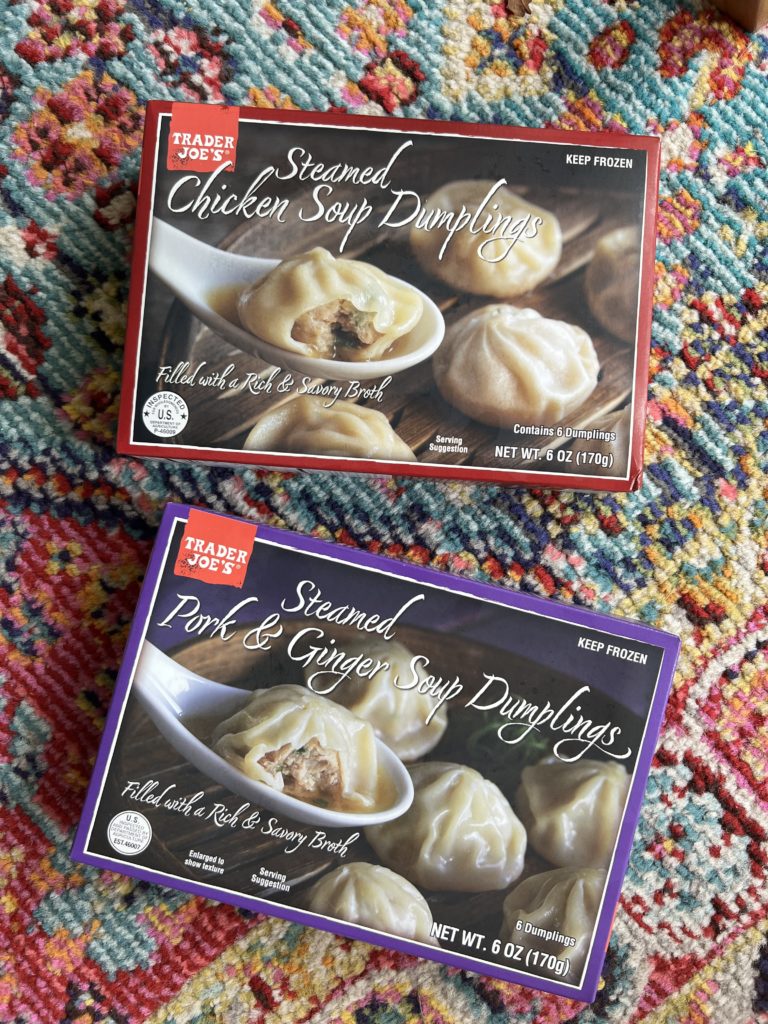 Trader Joe’s soup dumplings are pre-cooked, you just need to heat and eat. There are two recommended heating methods, microwave and steaming on the stovetop.

The first is the easiest— simply steam the dumplings in their included microwaveable tray in the microwave for up to 2 minutes.

How to cook Trader Joe’s soup dumplings in the microwave

Also, if you have a xiaolong, a small bamboo steaming basket, feel free to use it to prepare these tasty bites— though the microwave is by far the quickest and easiest method.

Let’s take a look at each flavor of soup dumpling offered at Trader Joe’s. 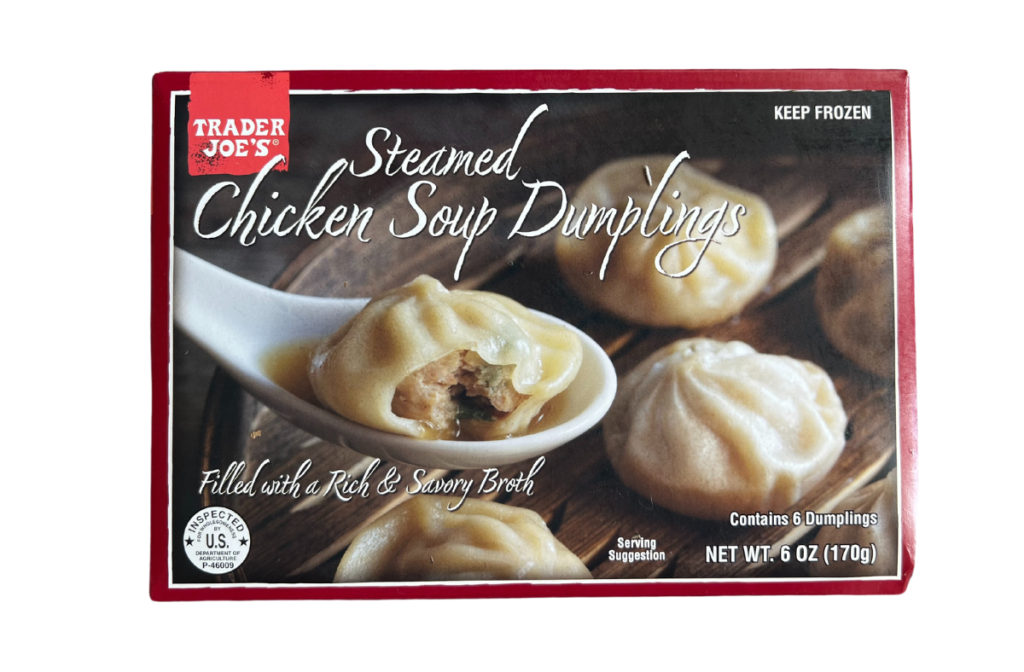 Filled with a rich and savory broth, Trader Joe’s steamed chicken soup dumplings are one of the most highly rated TJ’s frozen foods, with shoppers not being able to get enough.

Each purse-shaped dumpling is filled with a ground chicken mixture, spices, and chicken broth, which becomes a liquid once fully heated. 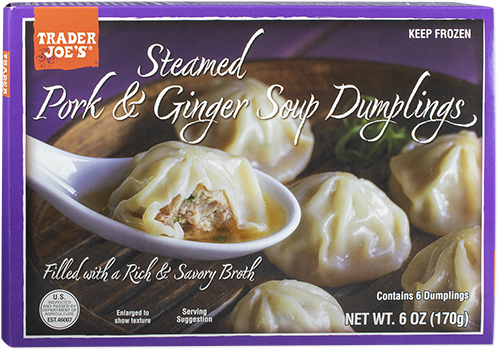 Xiao long bao are traditionally filled with pork, so this second option from Trader Joe’s adheres closer to culinary tradition.

Trader Joe’s says they’ve veered from the traditional preparation with the inclusion of ginger as a major flavor player, with their recipe containing more than five percent ginger, giving each dumpling a sizeable kick of pungent, spicy heat.

We are going to go on record and state that Trader Joe’s soup dumplings are one of the tastiest foods at TJ’s—frozen or otherwise. They are just that good!

The soft dumpling filled with hot soup is about as close as you get to perfection and the flavor is 10/10. This goes for both flavors of TJ’s soup dumplings.

If you want to spice things up, we suggest a small drizzling of Trader Joe’s Yuzu hot sauce.

Here are a few more reviews.

“I eat these WAY too much. Like 3x per week. They’re one of the best things TJs has to offer.”

“Super easy to make (microwave for 2 min in the tray they come in), and there is actually a decent amount of broth coming out of each dumpling! The filling was really flavorful. Very pleasantly surprised”

“Adore these. Whole box is so filling and pretty low calorie too. They’re so warm and comforting.”

“I love these so much! They’re one of my all-time favorite TJ’s finds. I actually think I’m a little burnt out on them because I’ve eaten them so much lately. Going to take a break for a few weeks but I’m sure they’ll be back in my cart soon enough.”

If you can’t find them in the frozen foods section, ask a Trader Joe’s employee to check and see when they will be back in stock. It’s not uncommon for Trader Joe’s soup dumplings to be out of stock as they are a very popular item.

How do you serve Trader Joe’s soup dumplings?

Unfortunately, at the moment, Trader Joe’s has not released veggie soup dumplings.

If it’s an item you’d like to request, Trader Joe’s has a form you can fill out on their website for feedback and product suggestions.

How do you eat Trader Joe’s soup dumplings?

With a spoon! Trader Joe’s recommends eating each dumpling on a large spoon.

“Since the broth inside will get quite hot, we recommend placing each Dumpling in a large, deep spoon and puncturing the skin with a pair of chopsticks to let the soup cool slightly (and let the spoon catch any soup spillage) before eating.”

We personally like to use a ramen spoon or chirirenge. This allows you to bite a tiny hole in the dumpling, letting the soup run into the spoon. The dumpling and broth should then be consumed in one bite.

Trader Joe’s Olive Oil: Why You Need To Get Your Hands On It

All You Need To Know About Trader Joe’s Ravioli

What Kind Of Gnocchi Does Trader Joe’s Have?