Traditional bruschetta is a simple Italian appetizer involving grilled bread, olive oil, and garlic. But there’s a popular variation on this Italian treat involving tomatoes as a savory topping to compliment the garlic and the crunch of the bread.

Trader Joe’s carries a 12 oz. jar of bruschetta topping in their canned and dry foods aisle. You can find this simple pleasure next to the pasta sauces and salad dressings.

A jar of bruschetta at Trader Joe’s is currently priced at $2.99 for 12 ounces. 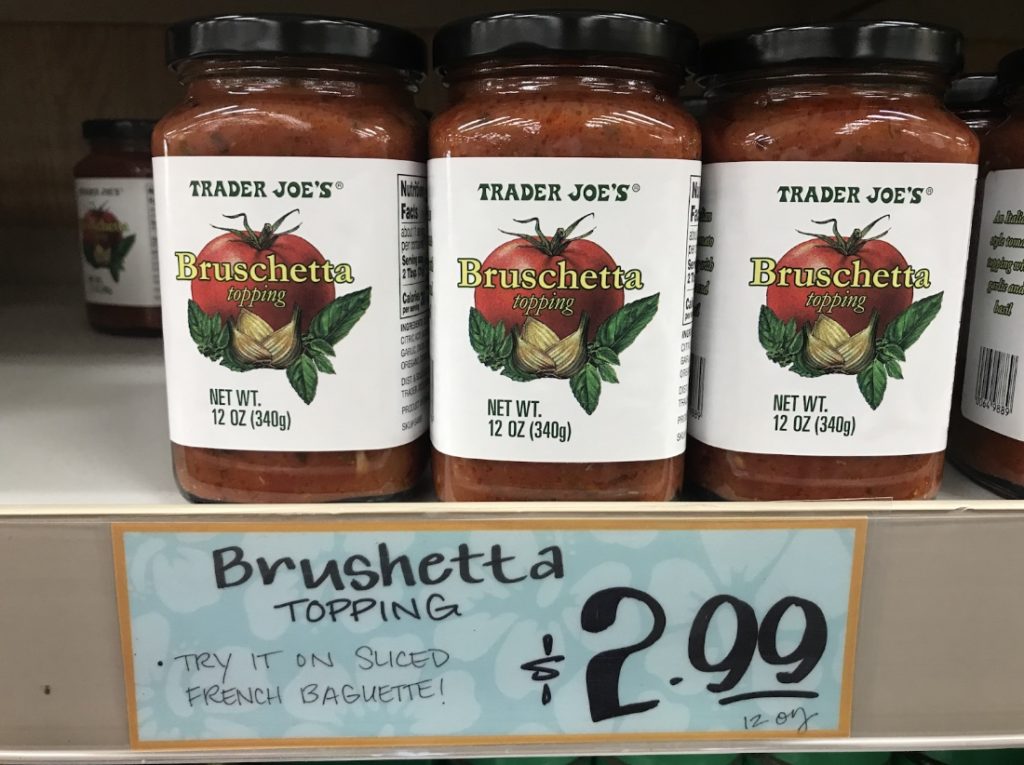 Here’s a photo of the nutrition information and ingredients found in Trader Joe’s Bruschetta: 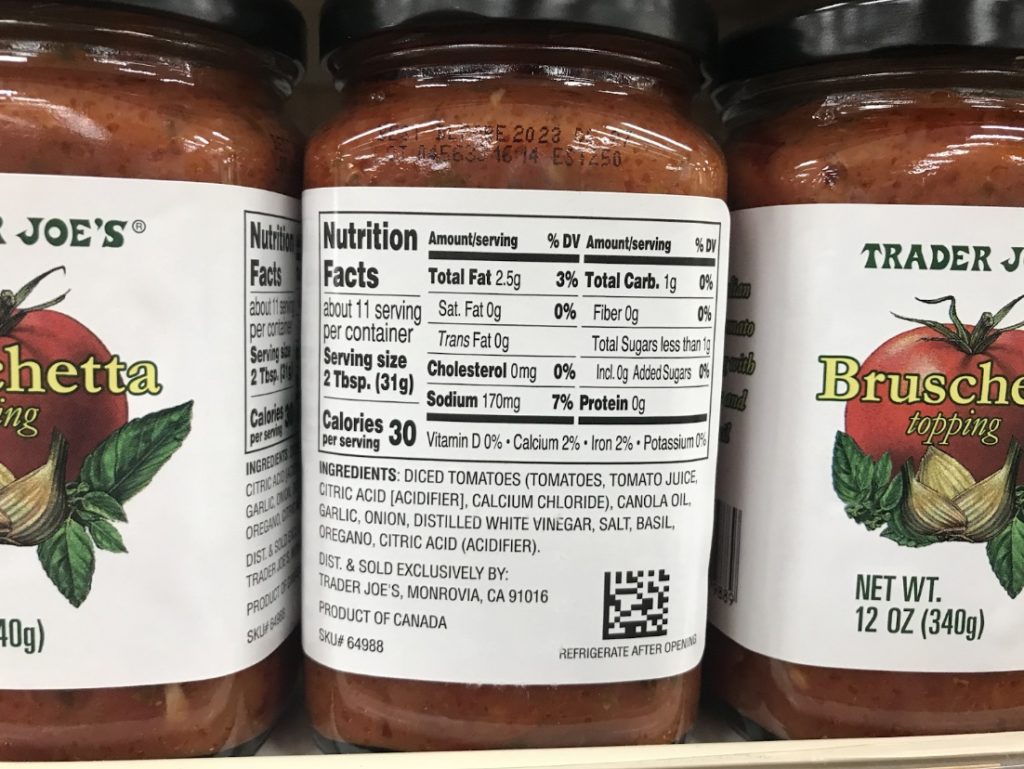 As you can see, Trader Joe’s Bruschetta is made with a fairly simple recipe. Tomatoes make up the bulk of this topping, along with garlic, onion, and spices. As far as we can tell, there aren’t any truly concerning ingredients on this list.

As far as the nutrition facts go, this simple sauce is super low in fat, cholesterol, carbs, sugar, and even sodium. It’s honestly a huge bonus that a topping like this only has 170 mg of sodium per serving, as many similar sauces and toppings would contain higher sodium levels.

What Do You Serve With Trader Joe’s Bruschetta?

The most traditional way to serve this type of bruschetta topping is on top of a piece of grilled bread (think French bread as opposed to sandwich bread) along with some olive oil and garlic.

Here’s an example to show you what this could look like: 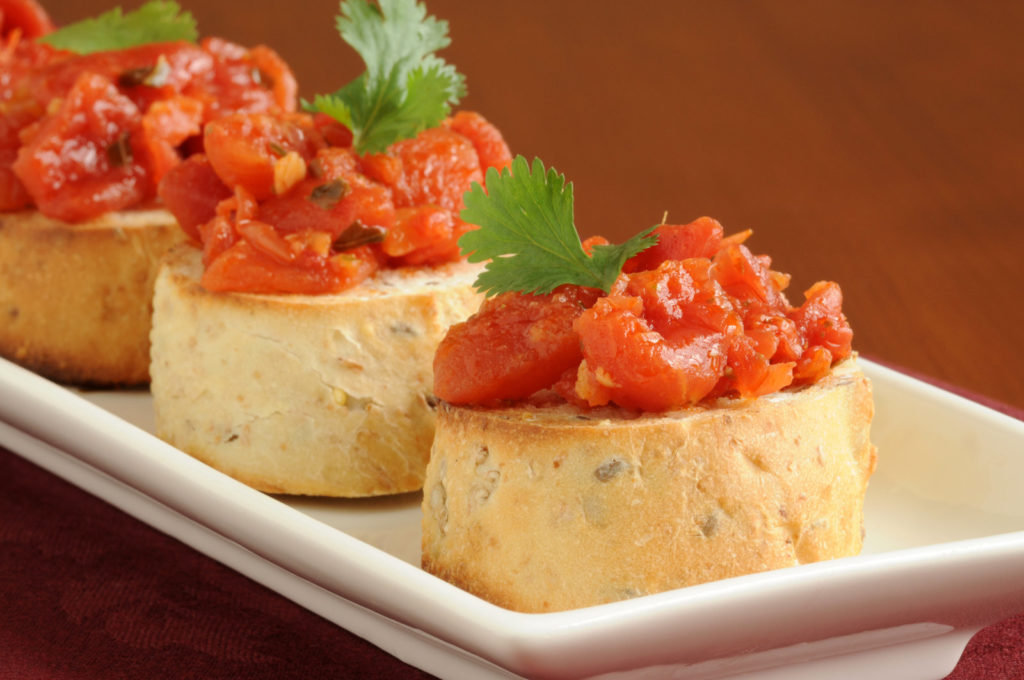 To spice up your bruschetta, you could try adding some melted cheese or sprinkling some grated parmesan on top. You could also add some basil leaves and sliced mozzarella to turn it into a bruschetta/caprese hybrid snack.

But Trader Joe’s Bruschetta doesn’t stop there. This topping is super versatile!

You could also try this recipe for a Three-Ingredient Bruschetta Lentil Salad from Alexandra’s Kitchen.

Finally, try out this 5-Ingredient Bruschetta Chicken recipe from Tipps in the Kitch.

As far as we can tell, Trader Joe’s shoppers absolutely love this bruschetta topping. 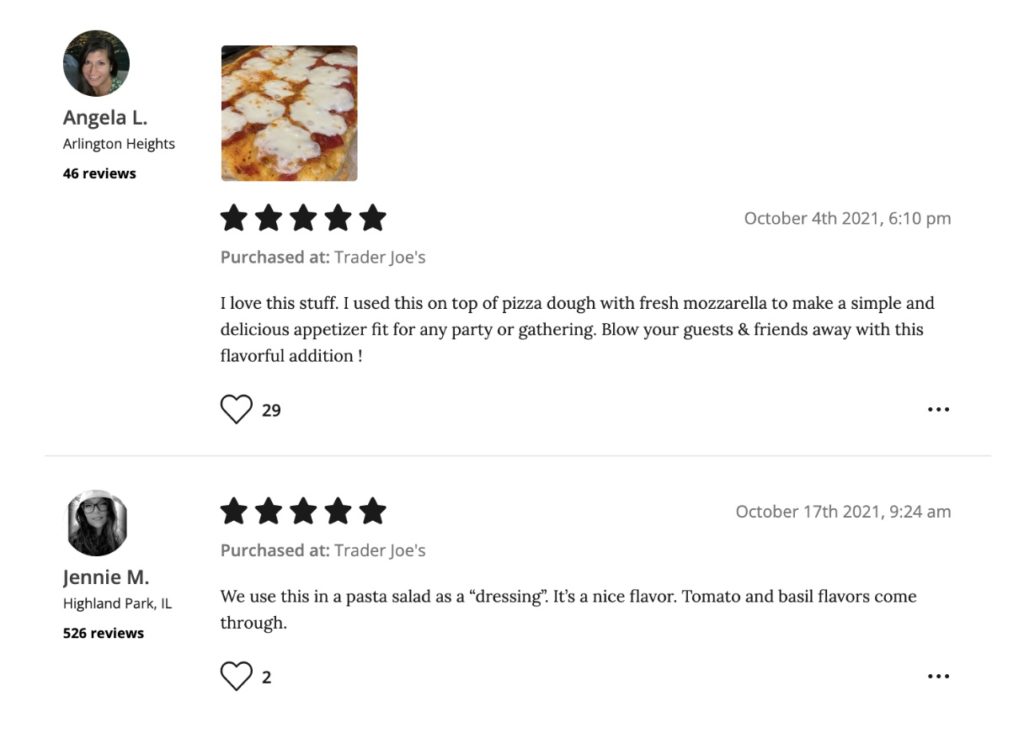 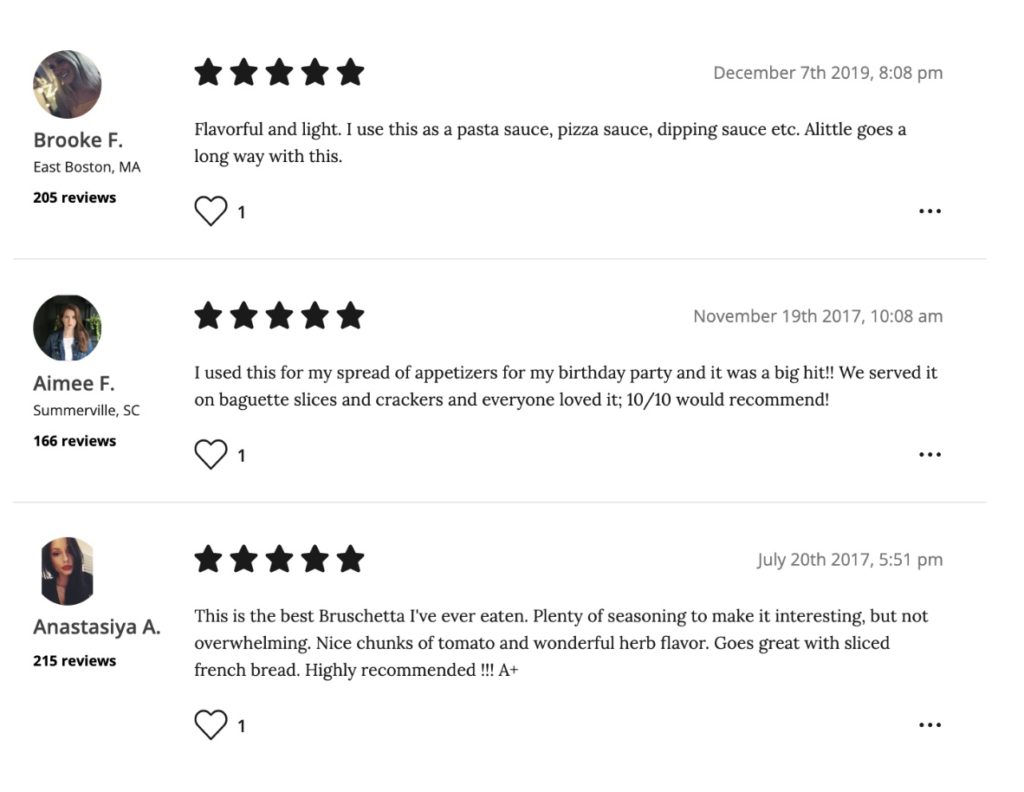 Check out these great 5-star reviews from users on Influenster!

Yes! Trader Joe’s Bruschetta topping does not contain any animal products, so it is completely vegan.

Can you freeze Trader Joe’s Bruschetta?

Yes! Bruschetta topping freezes super well and can be thawed whenever you’re ready to use it. Just keep in mind that glass can break when it goes between extreme cold and heat, so be careful when moving your jar in and out of the freezer.

Also keep in mind that the bruschetta topping will expand when it freezes, so if you freeze the entire jar when it’s full, there’s a chance the pressure of the expanding contents could crack the jar.

It’s best to either remove some of the topping from the jar before freezing or transfer the contents into a plastic container before putting it in the freezer.

Trader Joe’s Bruschetta is a super simple topping to add to anything from a simple piece of toast to a more elaborate pasta entree. It’s vegan and gluten free, plus it has amazing reviews from customers across the board. At just $2.99 per jar, what are you waiting for?

Trader Joe’s Cheesecakes: Are they Worth Your Money?