Trader Joe’s quality and selection of frozen Indian food are second to none! And when it comes to Indian cuisine, one absolute must-have is naan bread– it’s the perfect compliment to Trader Joe’s butter chicken, tikka masala, curries and palak paneer (just to name a few!) or to eat warm on its own.

Trader Joe’s sells Naan bread. It can be found along with Trader Joe’s Indian-style frozen entrees in the freezer cases. 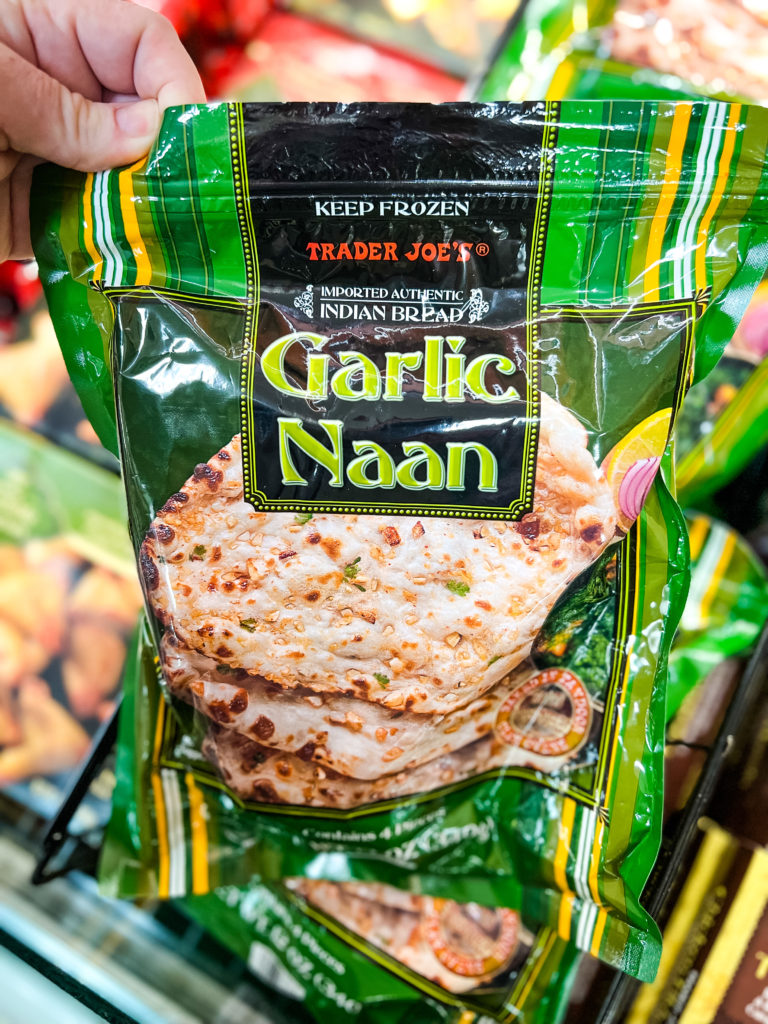 As of writing, we were only able to find Garlic Naan in the freezer case at Trader Joe’s.

Tandoori Naan was previously available alongside the Garlic Naan, however, it is currently not in stores.

We’re not sure if it’s a supply issue or if Tandoori Naan has been discontinued. The Trader Joe’s website currently lists Tandoori Naan as not available.

As Trader Joe’s brand products are private labels, we can’t confirm who makes Trader Joe’s Naan. It’s been reported by Fortune that TastyBite is behind a selection of Trader Joe’s Indian foods, which may or may not include the naan bread.

What we do know is that Trader Joe’s Naan bread is a product of India.

How Much is Trader Joe’s Naan?

Currently, Trader Joe’s Garlic Naan is $2.69 for 4 pieces of bread.

This price may vary by location and/or change at any time. 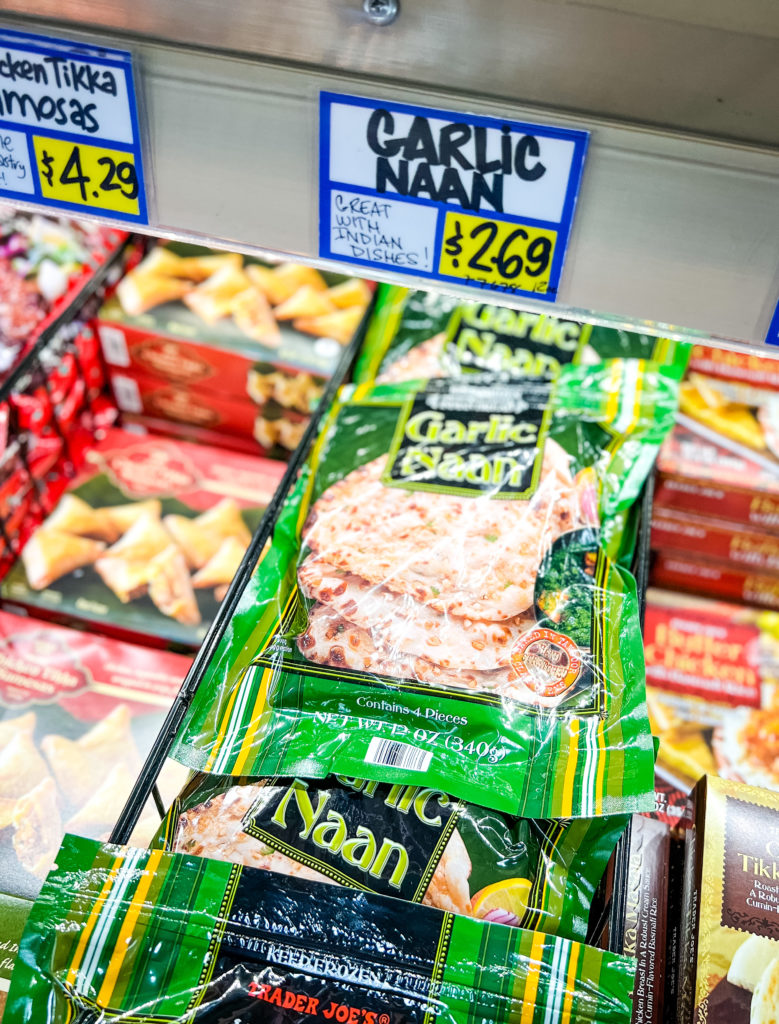 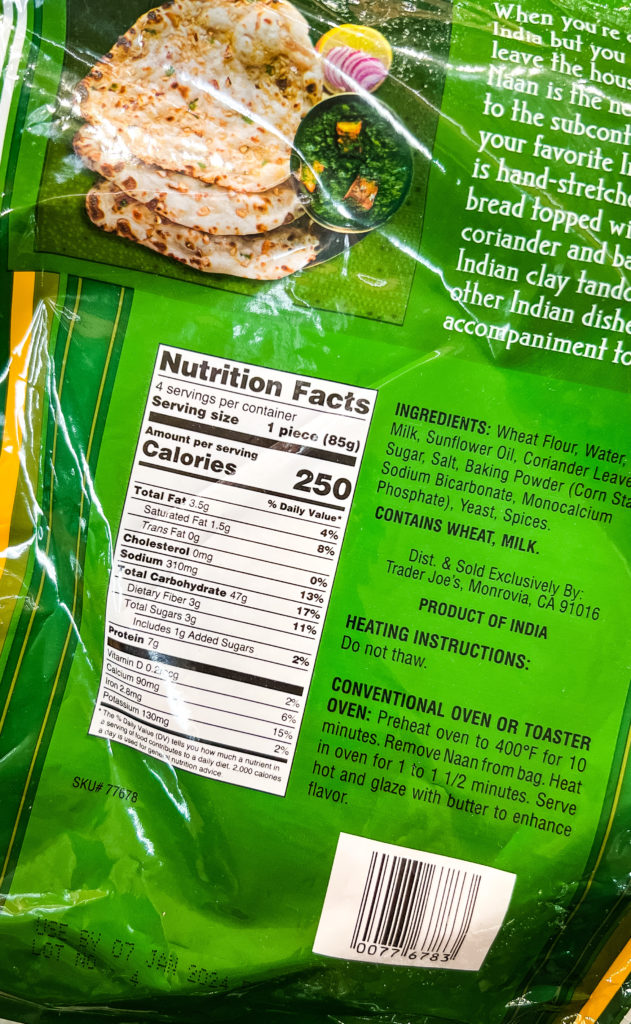 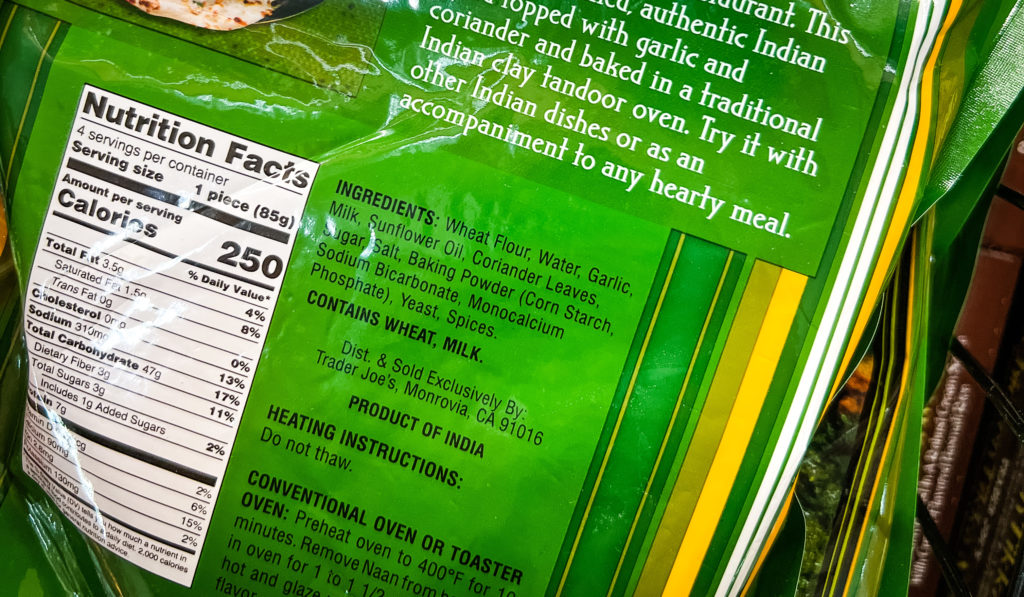 No, Trader Joe’s Naan is not vegan as it contains milk.

How do you Heat up Trader Joe’s Naan?

Trader Joe’s Naan comes frozen but fully cooked and simply needs to be heated to eat. The package has directions for heating the naan in a conventional or toaster oven.

How to Cook Trader Joe’s Naan in the Oven

How to Cook Trader Joe’s Naan in the Air Fryer

How do you Reheat Trader Joe’s Garlic Naan?

Trader Joe’s Naan is best when it is heated and eaten right from the bag. The easiest way for naan to be reheated is in the microwave for 30 seconds, however, it will not be as crisp. Additionally, you could reheat naan in the oven or air fryer for 1-2 minutes.

What To Eat With Trader Joe’s Naan?

Our favorite way to eat Trader Joe’s Naan outside of Indian food is as a Naan Pizza, using the garlic naan bread as a pizza crust. Here’s an easy recipe

The sauce and toppings for naan pizza can be modified to your liking. We love the idea of pesto with Mediterranean veggies and olives and alfredo sauce along with chicken and mushrooms.

We also found a Garlic Naan Grilled Cheese recipe that looks amazing! Here is our own modified version.

Additionally, Trader Joe’s Naan is wonderful as a dipping bread for hummus, tzatziki, and baba ganoush.

Is Trader Joe’s Naan Any Good?

We have purchased Trader Joe’s Naan more times than we can count because it is SO GOOD. We eat it will Indian-style cuisine and on its own because it’s inexpensive, easy to prepare, and tastes delicious. We also love it as a pizza or flatbread crust, which only enhances its versatility.

If you’re looking for authentic naan-style bread that’s easy to prepare, Trader Joe’s has you covered!

Currently, Trader Joe’s offers Garlic Naan bread imported from India in their freezer cases. This naan bread can be served with your favorite Indian foods, used as bread for dips, and as a crust for pizza or flatbread. The possibilities are endless!

What Kind Of Bone Broth Does Trader Joe’s Sell?

Trader Joes Orange Chicken: Why It Should Be On Your Shopping List

What Salad Dressing Does Trader Joe’s Have?