Originating in the Ottoman Empire (essentially modern-day Turkey), shawarma is a traditional Middle-Eastern dish prepared by roasting thinly sliced pieces of seasoned meat on a vertical spit. Shawarma is typically made with either lamb or chicken and served wrapped in soft, warm Middle-Eastern flatbread. Simple and delicious, shawarma has become a popular Middle-Eastern street food served all over the world.

Considering all this, it’s no surprise that Trader Joe’s has hopped on the shawarma train, too. In 2018, Trader Joe’s first released their pre-marinated Shawarma Chicken Thighs inspired by the Turkish dish. Today, I’m going to try to find out if they’re any good.

As the grandchild of Turkish-Greek immigrants, chicken shawarma is one of my all-time favorite types of prepared meat.

First, let’s look at things like cost, ingredients, and nutrition.

Trader Joe’s Shawarma Chicken Thighs sell for $6.99 per pound, and each package contains two large boneless and skinless thighs. This is on the expensive side for a TJ’s product, so hopefully the flavor delivers.

These chicken thighs are gluten free. However, they do contain soy which might be a dealbreaker for some shoppers.

While it’s easy to assume that TJ’s Shawarma Chicken Thighs are kept in the frozen section, they’re not! They’re actually kept in the meat section just past the produce, near the bacon, sausage, and fresh fish.

If you’re concerned that these chicken thighs might be too spicy, don’t worry. Middle Eastern food isn’t known for being particularly spicy, at least not when it comes to “hot spice.” Instead, Middle Eastern food is extremely flavorful and aromatic, relying heavily on warming spices like coriander, cinnamon, cloves, cumin, and nutmeg.

A typical shawarma spice blend consists of things like cinnamon, cardamom, coriander, clove, allspice, and black pepper. Unfortunately, none of these spices can be found in Trader Joe’s Shawarma Chicken Thighs. Instead, they use dehydrated onion and garlic, sea salt, paprika, turmeric and parsley. The ingredients label also lists “spices,” but I’m obviously not sure what that means.

Judging by this, I’m not convinced that Trader Joe’s Shawarma Chicken Thighs can really deliver an authentic shawarma flavor, but keep reading to find out what other reviewers have to say.

Nutrition wise, these chicken thighs aren’t the healthiest food in the world, but they’re also not the least healthy. The marinade contains zero sugar, so you don’t have to worry about any sneaky sugar content. However, it does contain quite a bit of salt. In fact, in just one 4-oz serving of TJ’s Shawarma Chicken Thighs (a quarter of one package), you’ll be consuming 440 mg of sodium.

You’ll also get 21 grams of protein, which is good. But along with that, you’ll be consuming 100 mg of cholesterol and 7 grams of fat (1.5 grams of which is saturated fat). Each serving of Trader Joe’s Shawarma Chicken Thighs contains 160 calories, which is not particularly high for a serving of prepared meat. 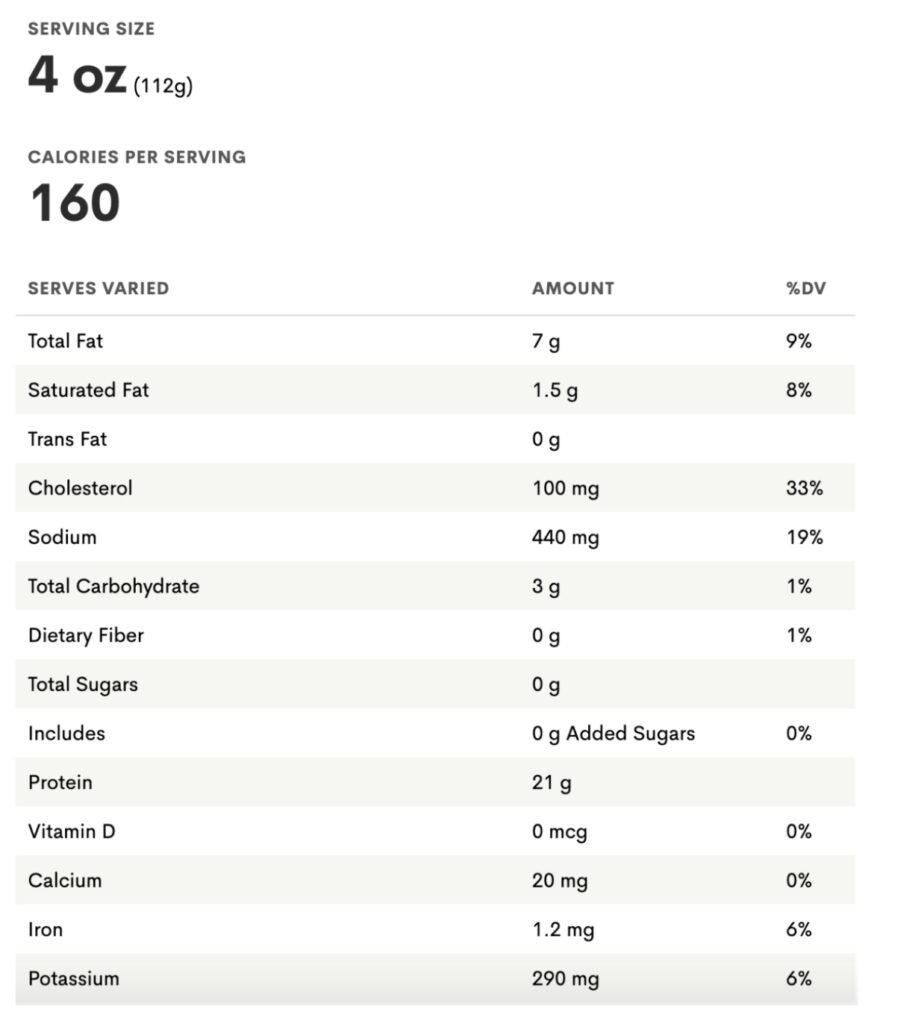 When you purchase a package of TJ’s Shawarma Chicken Thighs, it’s important to know that you’re buying raw meat. These chicken thighs must be fully cooked after purchasing before they can be safely consumed.

According to the package instructions, these chicken thighs can be cooked either in a conventional oven or on a grill. However, many people have shared that using a crockpot or airfryer are great methods, too.

To cook in the oven, Trader Joe’s recommends preheating your oven to 400°F, removing the chicken thighs from their plastic packaging, and placing them in the center of a baking sheet. When the oven is preheated, place the baking sheet onto the center rack of your oven and bake for about 20 minutes or until the center of each thigh is cooked to 165°F. (As you’ll find out below if you keep reading, these instructions probably need to be altered a bit in order to make sure your meat is fully cooked.)

If you’d rather cook your shawarma chicken thighs on the grill, simply preheat your grill top to a medium-high heat, then grill your chicken thighs until they reach an internal temperature of 165°F. Some TJ’s shoppers recommend cutting the thighs up into smaller pieces before grilling.

TJ’s Shawarma Chicken Thighs should theoretically be ready to prepare as-is when you purchase them, according to the instructions on the package. But if you’re looking for a way to get more adventurous or add this chicken shawarma to another recipe, keep reading.

TraderJoes.com even offers their own recipe using their Shawarma Chicken Thighs. This one is for a Shawarma Chicken & Rice Soup that contains just eight ingredients, all of which can be found at your local Trader Joe’s.

If you’re a fan of airfrying, ForkToSpoon.com has a great recipe for Air Fryer Trader Joe’s Shawarma Chicken Thighs that you absolutely have to try. By air frying your chicken thighs, you can get all the crunch and crispiness of fried chicken without the mess or unhealthiness of deep fryer oil.

Between the apparent lack of proper seasoning and the less-than-perfect cooking instructions on the package, I’m still not convinced that this chicken shawarma is worth buying. But let’s see what a few other people have to say…

As I suspected, this Reddit user says they were disappointed by the lack of flavor in TJ’s Shawarma:

Another user responded, suggesting that cooking these thighs in the crockpot yields a better result than following the package instructions:

From yet another user on the same thread, it seems safe to say that the cooking instructions provided for these chicken thighs might not be the most reliable:

From what we’ve seen here, it seems like using a crockpot, grill top, or airfryer is definitely the way to go rather than trying to cook these chicken thighs in the oven. But that still doesn’t make up for the lack of flavor.

Then again, everyone has their own tastes, and some people definitely seem to love TJ’s Shawarma. MrsTraderJoes.com gave TJ’s Shawarma Chicken Thighs a 10/10 rave review, saying she’ll buy this product again and again: 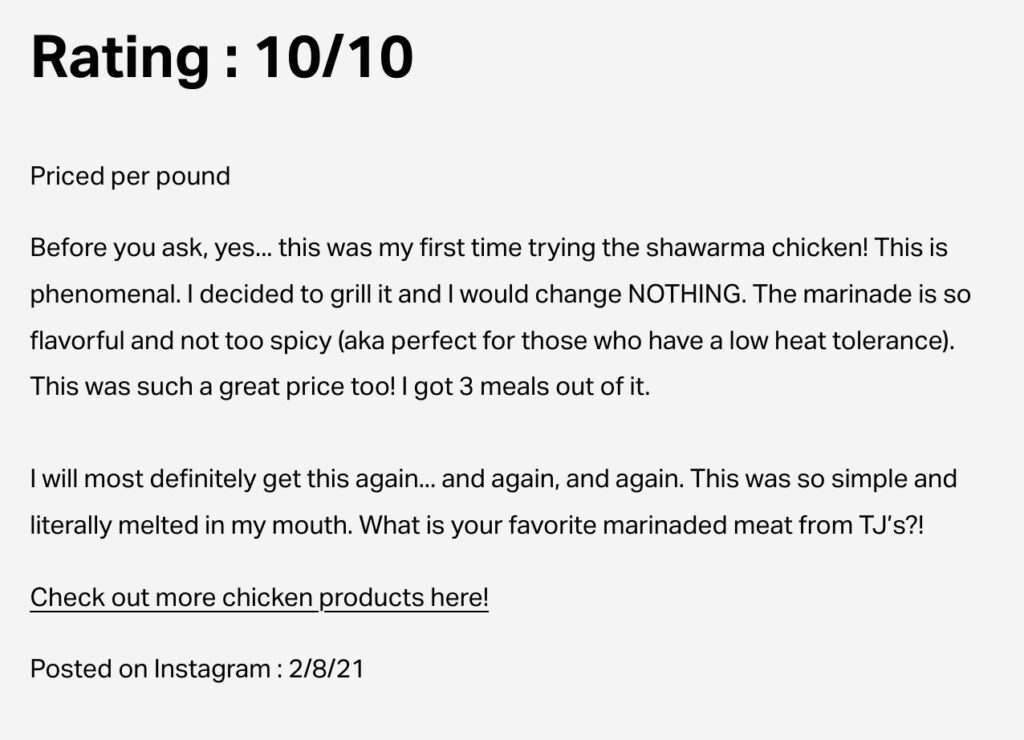 Overall, I’d say that if you’re not attached to an overtly traditional shawarma flavor and if you’re willing to stray from the package’s cooking instructions, then TJ’s Shawarma Chicken Thighs could be a great addition to your shopping list.

Trader Joe’s sells chicken shawarma for $6.99 per pound in their raw meat section. These chicken thighs are marinated in a blend of spices meant to imitate traditional shawarma spices, but the recipe isn’t all that traditional. Despite this, some Trader Joe’s fans seem to love this chicken shawarma offering, especially when it’s prepared on the grill, in a crockpot, or in an airfryer. Shawarma chicken is great when combined with other Middle-Eastern foods such as hummus, pita bread, and tzatziki, all of which can be found at Trader Joe’s as well.

Personally, as someone who grew up eating homemade Greek and Middle-Eastern food, I probably won’t be jumping at the opportunity to buy TJ’s Shawarma Chicken Thighs any time soon, but it sounds like a decent option if all you’re wanting is a slightly more exciting way to eat chicken.

Trader Joe’s Cookie Butter: (Everything You Need to Know)

How is the Instant Coffee at Trader Joe’s?