As a health-focused person, I was surprised to learn only just recently about the amazing health benefits of aloe vera. Of course, I always knew that aloe vera was great for burns, rashes, and other skin conditions when applied topically. But I had honestly never heard of drinking aloe vera juice as a dietary supplement. Once I found out, I was very tempted to try. 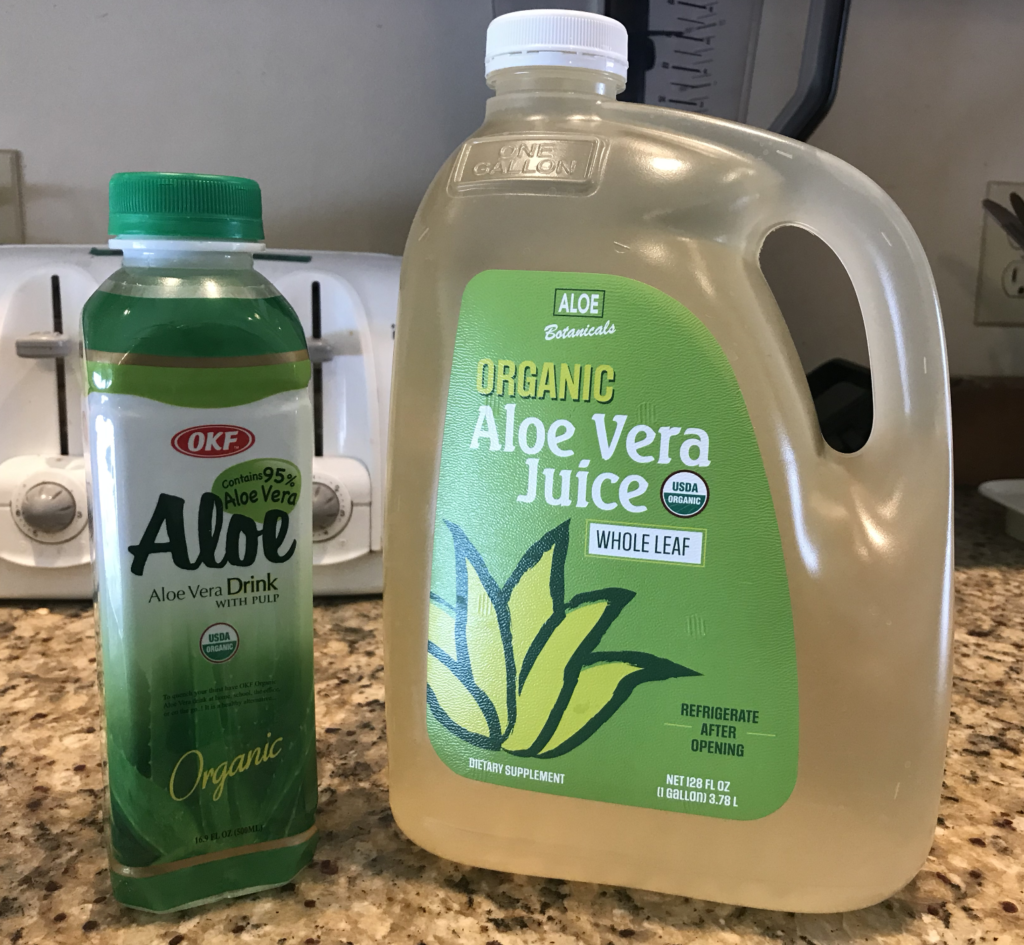 All About Aloe Vera

Aloe vera is a tropical succulent plant that originated in the Middle East, specifically the Arabian Peninsula. But today, aloe vera grows wild in tropical and subtropical climates all over the world. As a cultivated plant, aloe has become a common houseplant kept on windowsills in many households to be used in case of mild kitchen burns.

But the magic of aloe vera doesn’t stop at soothing burns. As a dietary supplement taken internally, aloe vera juice has been said to do everything from improve your digestion to lower your chances of getting cancer. I don’t know about you, but I’m always looking for ways to incorporate foods into my diet that can prevent the risk of disease.

Plus, aloe isn’t just another health fad based on inaccurate information. According to WebMD, aloe vera juice is a rich source of antioxidants which help to fight off free radicals in the body, lowering oxidative stress and reducing the risk of chronic conditions like cancer, heart disease, and diabetes. On top of all that, aloe vera juice is also a rich source of Vitamin C.

In my journey to explore the world of aloe vera juice, I took a trip to my local Trader Joe’s. Surprisingly enough, TJ’s actually sells full gallon jugs of organic aloe vera juice. These jugs currently cost $10.99 as of December 2022.

I wasn’t particularly excited about having to buy an entire gallon of this stuff just to try it, but I went for it anyway.

To sample the full range of TJ’s aloe vera juice products, I also picked up a container of their Organic Aloe Vera Drink made by a company called OKF. These 16-oz bottles are just $1.99 and contain 95% aloe vera juice.

Once I got my containers of aloe vera into my kitchen, I decided to try them both plain at first to see what they taste like on their own. I did this before even looking at the ingredients labels to get a more or less “blind” impression.

First, I tasted the OKF Organic Aloe Vera Drink, and unfortunately, I was pretty disappointed. This stuff is extremely sweet and tastes a bit like that white grape juice concentrate we all used to drink as kids. Sure enough, upon inspecting the ingredients label, I found that this OKF Aloe Drink contains “natural grape flavor.” It also contains cane sugar, and the combination of the two makes this stuff taste like overly sweet grape juice with chunks of aloe floating in it. To be brutally honest, I couldn’t finish more than a couple sips.

I will say, though, that I have a pretty low tolerance for sugar and sweetness in beverages. If you’re a fan of sweet drinks, you might actually like this drink. Just be aware that even though it’s organic and 95% juice, it contains a whopping 25 grams of added sugar per serving. This accounts for a full 50% of the maximum amount of sugars we should consume in a day to maintain a healthy diet. Personally, I just don’t think it’s worth it, and the bottle’s claims to be a “healthy alternative” seem more like a marketing technique than something that’s even a little bit true.

Next, I tasted Trader Joe’s own Organic Aloe Vera Juice. This time, I checked out the ingredients label first to prepare myself for any surprising tastes, and I was happy to find that this juice contains zero added sugars or flavors. In fact, it only contains three ingredients–water, organic aloe vera juice concentrate, and organic lemon juice concentrate.

Taste wise, I honestly can’t say that I like this stuff either. It essentially tastes like a mildly bitter yet very watered down lemonade, but without any sweetness. If the OKF Aloe Drink is on the extreme sweet end of the spectrum, this stuff is way at the other end.

Nutritionally, though, this juice has a lot more going on than its sweet counterpart. In just two ounces, you get 13 mg of calcium and 2.5 mg of magnesium, plus all the added benefits of the aloe as a source of antioxidants (not measured by a standard nutrition label). Interestingly, the label doesn’t list a percentage for the drink’s Vitamin C content despite the fact that it contains both aloe vera and lemon. I suspect there’s some Vitamin C in this drink that the label isn’t accounting for. 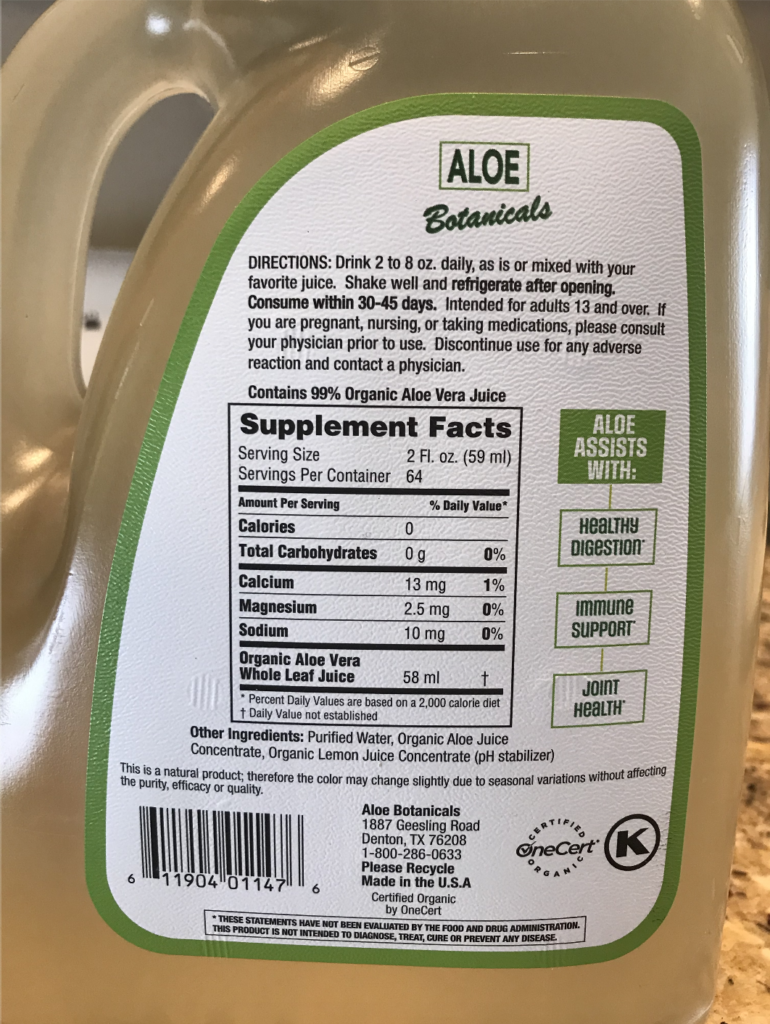 Since I couldn’t see myself drinking either of these juices on their own, I decided to pull in some other ingredients to make an aloe vera juice smoothie. Sounds good, right?

I had some of TJ’s “To the Power of 7” Green Organic Juice Beverage on hand, as well as my current favorite green protein powder, the Organic Plant Protein Blend from a company called Amazing Grass (not available at Trader Joe’s).

The Organic Aloe Vera Juice bottle recommends only drinking between two and eight ounces per day, so I used the green juice as the primary base, then added in eight ounces of aloe juice, one heaping scoop of green protein powder, and a whole banana. Then I threw it all into my Ninja blender and went to town.

(As a side note, it’s important to mention that doctors warn that drinking too much aloe vera juice can lead to stomach cramps or even diarrhea. If you have any unpleasant symptoms after drinking aloe juice, try either reducing the amount you’re drinking per day or talk to a doctor.) 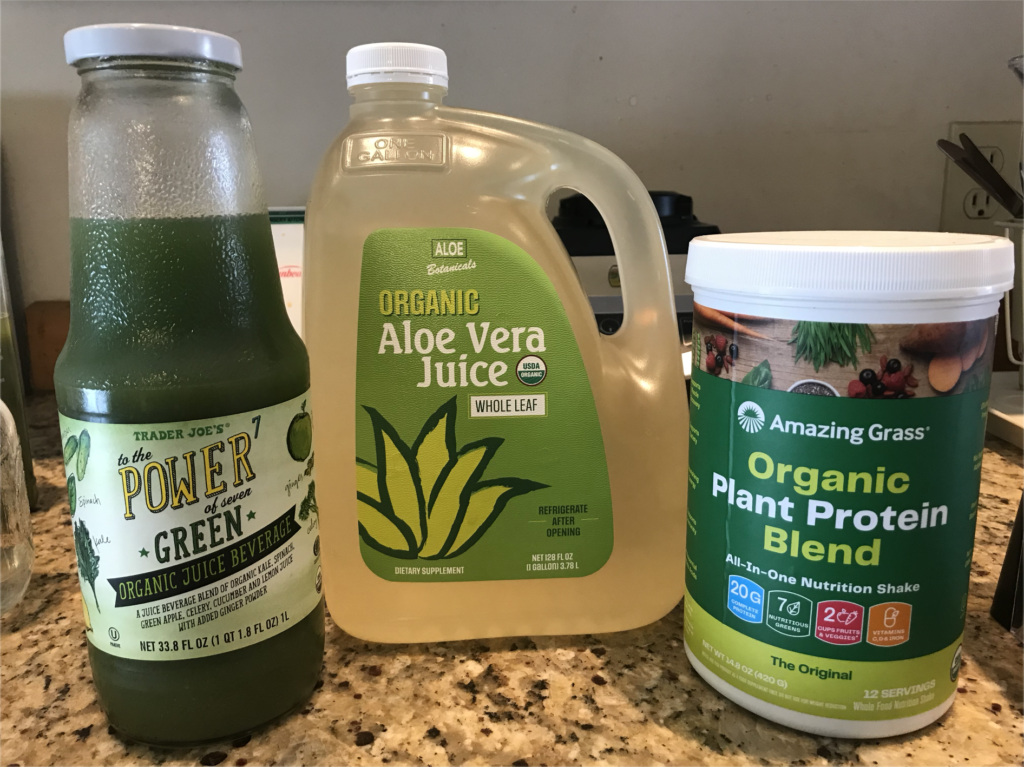 I can’t say that the aloe vera juice flavor really adds much to the smoothie, but the texture is great. The overall smoothie flavor is decent (mostly thanks to the banana and the green juice).

That said, I suspect that most people who are drinking aloe vera juice on a regular basis aren’t doing it for the taste. So, if you’re looking for a quality, organic option for aloe vera juice that’s affordable and easy to find, Trader Joe’s Organic Aloe Vera Juice is definitely a decent option. The only big downside I can see is that the juice comes from concentrate. That said, it might not actually matter in this case, since there’s no added sugar.

Typically, concentrated juices are considered less healthy because they tend to contain large amounts of added juice. But in this case, the aloe vera juice concentrate seems to be pure. According to LiveStrong.com, “juice from concentrate without any added sugar is as healthy as 100 percent fresh fruit juice.”

One thing about this Organic Aloe Vera Juice is that I expected the consistency to be a bit thicker. I think of aloe as being a very viscous, gooey substance, but the drink itself is no thicker than any other juice. If you’re looking for a thick aloe vera juice, you might be a little bit disappointed. But if you’re hoping for something that’s well-filtered, then this could be your ideal option.

A Note About Aloe Vera Juice

I was curious about the difference between drinking pure aloe vera juice (unfiltered, not from concentrate, not mixed with anything) versus drinking something like this TJ’s juice.What I found was super interesting and not necessarily what I expected.

According to this article I found on AloeLabs.com, there are two primary methods for creating aloe vera juice. One method involves grinding up whole aloe leaves, then filtering the resulting gel-like liquid extensively to remove a substance called aloin which is harmful to health. Finally, the filtered substance must be decolored to remove both the unappetizing brown color as well as any remaining aloin. Juice made this way tends to be on the thicker side.

The second method, however, uses only the inner leaf juice and produces a much clearer, thinner liquid. To produce this, the aloe leaves must be fileted and the outer skin and the inner portion of the leaf (attached to the skin) are removed. This leaves only the pure gel from the very center of the leaf. This gel is then filtered and pressed to result in a perfectly clear juice with an almost water-like consistency.

Unfortunately, it’s unclear which process is used to produce the aloe vera juice for the Trader Joe’s product.

While I’m not sure about hopping on the aloe vera juice train any time soon, I’ll probably finish the bottle of TJ’s Organic Aloe Vera Juice that I bought. It seems like an easy enough thing to add to my daily smoothies, and the fact that it doesn’t have much flavor means that it won’t interfere with other ingredients. Plus, if it really has all the health benefits people say that it does, I’m probably better off drinking it as often as I can.

The OKF Aloe Vera Drink, on the other hand, I’ll likely be offering to someone else who likes sweet beverages.

If you’re ever looking for any non-edible aloe vera products at Trader Joe’s, they also sell a 12-oz bottle of Aloe Vera Gel which is for external use only. This gel is great for treating mild burns, rashes, and other small skin wounds. You can even find whole aloe vera plants in the Trader Joe’s plant section at any location depending on supplies. You should theoretically be able to find aloe all year round at TJ’s, but if you have trouble finding it at your local store, try asking an employee when they’ll be available.

Trader Joe’s Bruschetta – A Popular Variation On this Italian Treat

Is Trader Joe’s Cheaper Than Vons?